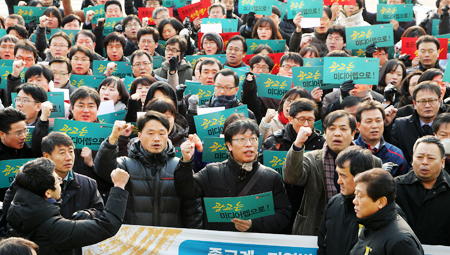 (Above picture: Protesters urge lawmakers to settle the conditions for the new channels under the media representative bill in front of the National Assembly in Yeouido, Seoul, on Dec. 28. / Yonhap)

Just as in any turf war, a clear hierarchy exists among TV channels. KBS, MBC and SBS are indisputably placed higher than any cable channels. So far and for the near future, the new comprehensive programming channels affiliated with Korea's major dailies are likely to remain at the bottom, for viewers and aspiring media personas.

After much fanfare and controversy, four TV channels began service on Dec. 1. After a month, their overall ratings remain under 1 percent. According to a rating survey institute TNmS, the average rating for December was 0.42 percent for jTBC, 0.34 for MBN, 0.32 for TV Chosun and 0.30 for Channel A.

The program with the top rating is jTBC's "Padam Padam... The Sound of His and Her Heartbeats", a romantic drama with heartthrobs Jung Woo-sung and Kim Beom. It remains in the lead with a viewer rating of 1.782 percent as of Jan. 2. Another jTBC offering, period drama "Queen Insu", is also fairing relatively well. Its tenth episode, which aired on Jan. 1, achieved a 1.245 percent rating. What are the implications of such low ratings?

"I think we need time. With time and high quality programs powered by public relations, I think the ratings will go up", a jTBC

reporter said. He believes the low ratings are due to the novelty of the channels, not necessarily the controversies surrounding the stations' launch.

He pointed out that SBS performed dismally when it started in 1991 but was taken seriously after its 1995 drama "Hour Glass" became a sensational hit.

The same view resonates from people at competing stations as well. A veteran producer from KBS who asked to remain anonymous told The Korea Times that he does not think the new channels are doomed.

"Personally, I think some of the programs on the new channels are pretty good. They are suffering from minimum ratings because people are not used to them yet", he said. The new channels were assigned numbers close to the existing broadcasters, from 14 through 20 differentiated by region.

Nonetheless, they do not pose much threat to the established broadcasters in the short run.

Before beginning their services, the new channels created controversy by scouting talent from competitors and their plans to directly negotiate with companies wishing to advertise. KBS lost at least 10 seasoned producers, all from entertainment programs each with 10 to 15 years of experience.

"There are no grudges against people who switched jobs. It is the same as in any other industry. Some people move for financial advantages, some follow their mentors and some see a better future in their new position", the producer said.

Korean broadcasters currently use agencies to secure advertisements, a way to ensure the broadcasters focus on content and remain somewhat neutral from the firms. Changes to this law are pending in the National Assembly and this is stirring controversy because the new channels will be exempt for having to use the agencies.

Unfortunately, unlike those on the inside, those wanting to enter the industry are being swayed by ratings.

For college graduates suffering from a lack of jobs, the announcement of the new channels was great news.

Indeed unlike the open-air broadcasters who hire maybe only one entry level producer, jTBC hired 17 producers for its launch. MBN, Channel A and TV Chosun all recruited about six producers. After a month, the low ratings are making job-seekers question the future of the new channels.

"For someone who wants to become a producer, it is not just the pure quality of a station's programs but viewer reaction is also crucial. So (even if these programs suffer from low ratings due to boycott) I can't ignore the dismal ratings of the new channels", a senior at Seoul National University told the Korea Times, wanting to remain anonymous. She has applied to all major broadcasters and the new channels.

"I made it to the final round of interviews at TV Chosun and did not get the position. But I think it's good that I didn't. A lot of students are deterred from applying to the new channels after seeing their current status", she explained.

Another downside for the new channels in attracting talented individuals is their innate link to the current administration.

"Because it is the current administration that essentially allowed media firms to launch these channels, no one can predict how they will be affected when things change politically", the Seoul National University senior added.

"Four new TV channels face uncertain futures"
by HanCinema is licensed under a Creative Commons Attribution-Share Alike 3.0 Unported License.
Based on a work from this source