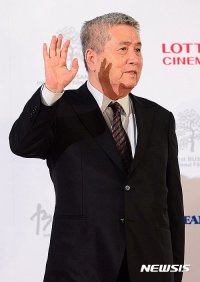 The French government will award Korea's iconic director Im Kwon-taek, 71, with the title of Knight of the Order of the Legion of Honor, France's highest order (Chevalier de l'Ordre de la Legion d'Honneur).

Launched in 1802 by Napoleon, the Legion of Honor is granted regardless of the nationality of its recipient.

The title recognizes Im's long and active career, especially his efforts to defend the movie industry and promote Korean cinema in France. Im has directed 100 films and won various awards, including the Best Director Award at the 2002 Cannes Film Festival for "Chihwaseon". He also received UNESCO's Fellini Medal that year.

Furthermore, the decoration acknowledges the filmmaker's involvement in the celebration of the 120th anniversary of diplomatic relations between Korea and France, according to the French embassy. Kim Dong-ho, director of the Pusan (Busan) International Film Festival (PIFF), was honored with his second Legion d'Honneur at this year's festival in October.

The award ceremony will take place Friday at the French Embassy in Seoul, and Philippe Thiebaud, the ambassador to Korea, will hand over the award on behalf of the French government.

Im's long cinematic journey will shine again at the Dubai International Film Festival (DIFF), the leading cinematic event in the Arab world. He will leave Dec. 13 to receive the Lifetime Achievement Award along with American actor Danny Glover and Egyptian director Youssef Chahine.

"France to Award Director Im Kwon-taek"
by HanCinema is licensed under a Creative Commons Attribution-Share Alike 3.0 Unported License.
Based on a work from this source