From candy kiss to foam, gum and kimchi kiss 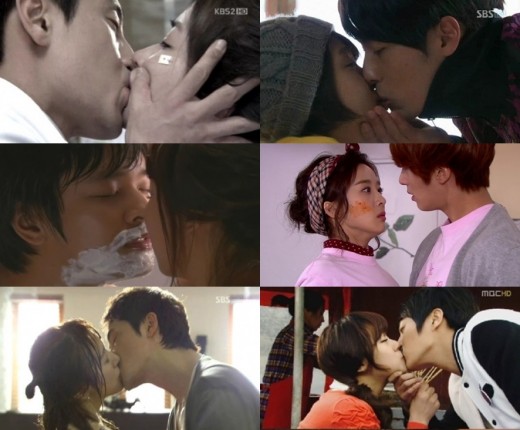 The kiss between Shin Ha-kyun and Choi Jung-won in the KBS 2TV drama "Brain" is lingering in people's minds.

Neurosurgery specialist Kang-hoon (Shin Ha-kyun) asked his junior staff Ji-hye (Choi Jung-won) "Do you like me?" to which she replied, "Can't I like you?" and this led to him pulling her into a kiss. There was gum on her face and he took it off with a light kiss and then continued to a long and deep kiss.

There have been many different types of kisses using different props lately. What other kiss scenes are there?

The most dramatically used prop of all was definitely from KBS 2TV drama "IRIS". Lee Byung-hun and Kim Tae-hee had exchanged feelings for each other in Japan and shared a candy in their mouths while they kissed.

In the third episode of "IRIS" in November of 2009, Hyeon-joon (Lee Byung-hun) and Seung-hee (Kim Tae-hee) gave back and forth to each other a candy as a White Day present.

As Seung-hee was expecting a gift but didn't get any from Hyeon-joon, she was very disappointed. He then passed on the candy in his mouth to hers. This scene created numbers of parodies and many more 'OO kisses' after that.

The next kiss of issue was Hyun Bin and Ha Ji-won's 'cappuccino foam kiss'.

In the SBS drama "Secret Garden" last December, when Ha Ji-won had foam on her lips after drinking her cappuccino and didn't wipe it off, Joo-won (Hyun Bin) scolded Ha Ji-won saying, "What's wrong with women? They don't do that when they're by themselves". Then he held her chin and wiped the foam off her lips with his. Shocked, she asked, "What are you doing?" to which he casually replied, "You can't wipe it off with your sleeves".

This 'foam kiss' was parodied by many such as Yoo In-na and Kim Sung-oh, Big Bang Top (Choi Seung-hyun) and G-Dragon, Kim Tae-won and Yoon Hyung-bin and many more in dramas and entertainment programs. Recently KBS 2TV "1 Night 2 Days" Lee Seung-gi pretended he was La-im and made his own 'foam kiss by myself'.

Yoon Doo-joon and Soon-seok (Park Soo-young-II) 'spoon kissed' in the MBC drama "All my Love" in April.

Soon-deok told Na-yeong that she kissed Doo-joon to not get her fake relationship blown up. When Na-yeong asked her where she did it and how, Soon-deok just said, "Have you heard of the 'spoon kiss'?"

However, this was only in her head. This was a parody of Hyun Bin and Ha Ji-won's 'foam kiss' which was the two putting lips together with a spoon in between.

SBS drama "Lie to Me" Ah-jeong (Yoon Eun-hye) was drunk and had to spend a night at Ki-joon's (Kang Ji-hwan) house. In the morning, he shook up a Cola bottle and handed it over to a very thirsty Ah-jeong.

She was surprised at the bottle that popped open and Ki-joon laughed like a menace. While joking around in the Cola, they suddenly kissed without saying who was first. Ah-jeong then softly said, "It's sweet" after the kiss, referring to the Cola.

However, the 'Cola kiss' wasn't as much of a big hit as the others for the drama ended in misery for lack of progress, messy layout, romance disregarding emotions, random character changes, replacing of writers in the middle of the drama and many more.

In-yeong (Cho Yeo-jeong) had broken up out of anger but let in and forgave Seong-soo (Kim Jeong-hoon) when he asked her to let him stay with her for one night. She shaved his moustache for him and the two shared a real 'foamy kiss'. They kissed for about 25 seconds with the shaving cream all over their faces.

The most recent kiss of all was the 'kimchi kiss' from the twelfth episode of tvN drama "Flower Boy Ramyun Shop".

Making winter kimchi with Yang Eun-bi (Lee Chung-ah), Chi-soo (Jung Il-woo) asked her to give him kimchi herself when she gave everybody but him. Then he sucked on her marinated finger and said, "Needs more salt". As she tried to move away from her position he dragged her waist and kissed her on the cheek where there was sauce on it.

Netizen's who saw this said, "How could anyone make such a heart fluttering kiss scene while making kimchi?", "Candy kiss and foam kiss away", "It's a beautiful kiss scene without the smell of Kimchi" and more.

"Brain" promoter 3HW explains, "When there is a modifier with the word kiss like the 'stairs kiss', it tends to become a bigger issue than usual. By using things we see in everyday life as a prop for kissing, the attention drawn is more effective and viewing percentages rise for that moment".

"From candy kiss to foam, gum and kimchi kiss"
by HanCinema is licensed under a Creative Commons Attribution-Share Alike 3.0 Unported License.
Based on a work from this source