From Won Bin to Kim Woo-bin, the story behind casting for 'Descendants of the Sun' Yoo Si-jin 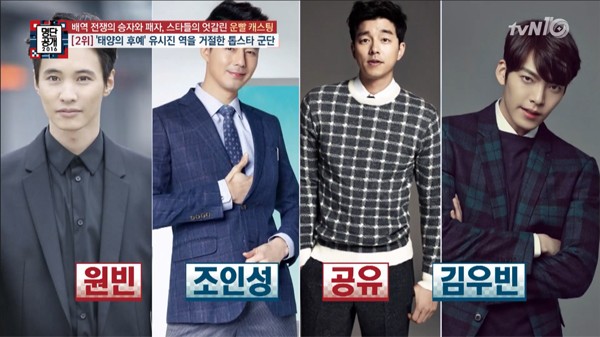 The story behind casting for Yoo Si-jin in 'Descendants of the Sun' has been revealed.

tvN's entertainment news show, 'Name List' aired on June 6 has revealed a list of 'Winners and Losers in casting war, lucky casting and the destiny of stars to cross paths'.

The top A-list actors' names on the most hopeful favorite casting include Won Bin, Jo In-sung, Gong Yoo, and Kim Woo-bin. The drama production team tried to cast the actors who would look best in the military uniforms.

However, the offer went to Song Joong-ki after all. It has been known that the actors who were previously contacted rejected the offer for the reasons of short hair they would have to maintain during filming, lengthy filming period outside Korea, and pre-filming system etcetera.

"From Won Bin to Kim Woo-bin, the story behind casting for 'Descendants of the Sun' Yoo Si-jin"
by HanCinema is licensed under a Creative Commons Attribution-Share Alike 3.0 Unported License.
Based on a work from this source