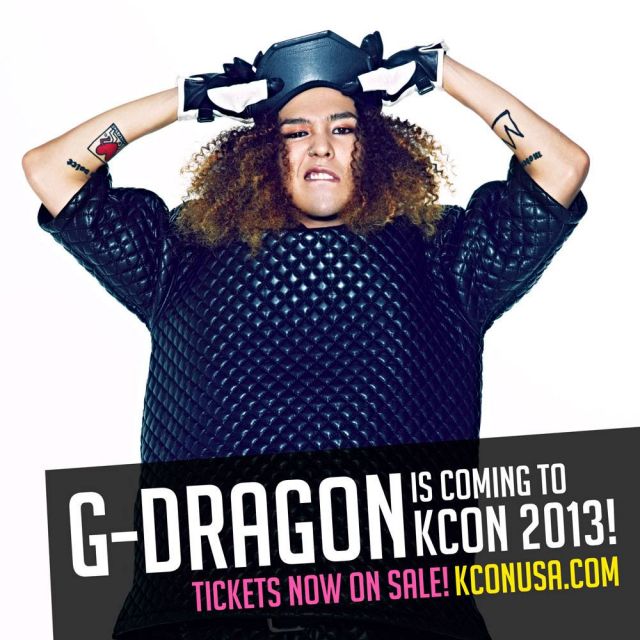 Convention Capping Concert Includes EXO, f(x), 2AM, TEEN TOP with Additional Artists to be Announced in the Coming Weeks

G-Dragon is the leader, rapper, and producer of the extremely popular Korean boy band BIG BANG. Since beginning his career at the age of 13 with YG Entertainment, G-Dragon has grown to become one of the biggest individual male icons in Korean pop music. His 2009 debut solo album, "Heartbreaker" was one of the most successful albums of the year, winning Album of the Year at the Mnet Asian Music Awards. G-Dragon is currently scheduled to release a full length sophomore effort later this month on August 18, which will include a track featuring the American Hip-hop superstar, Missy Elliott.

G-Dragon will be joining the five previously announced acts EXO, f(x), 2AM, and TEEN TOP. A trailer for the event can be viewed on KCON's YouTube page.

Tickets can be purchased through the KCON website here. Additional announcements surrounding the artists including headlining acts attending KCON 2013 will be shared in the coming weeks. Tickets for the star-studded event at the Los Angeles Memorial Sports Arena range from $60 to $300 for varying admittance to the six act concert, the convention floor and VIP access areas. More information can be found at www.kconusa.com.

KCON is set to take place on August 24 and 25 at the Los Angeles Memorial Sports Arena in Los Angeles, California. The concert will also be the first ever U.S. taping of the #1 K-Pop countdown show, M COUNTDOWN. For more information and updates, please visit www.kconusa.com.

KCON is produced by Mnet America (www.mnetamerica.com), a youth entertainment brand for all things Asian cool, which includes the biggest national, English-language lifestyle TV network in the U.S. for fans of Asian pop culture. Mnet America is a division of CJ Group; Korea's leading lifestyle and culture company.

"G-Dragon Announced As Headlining Artist For KCON M Countdown: What's Up LA!"
by HanCinema is licensed under a Creative Commons Attribution-Share Alike 3.0 Unported License.
Based on a work from this source