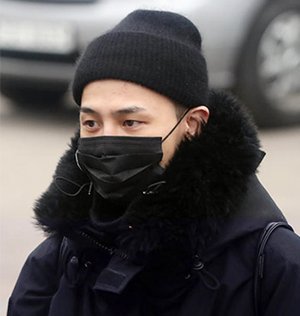 Singer G-Dragon arrives at an Army unit in Cheorwon, Gangwon Province on Tuesday.

G-Dragon of boy band Big Bang enlisted in the Army and started his mandatory military duty on Tuesday.

He was assigned to a unit in Cheorwon, Gangwon Province to undergo five weeks of basic combat training. Actors Ju Won and Ji Chang-wook have been serving there already.

G-Dragon is the second Big Bang member to enter the military, following T.O.P.

Another member Taeyang is set to begin his military service next month.

"G-Dragon Begins Mandatory Military Service"
by HanCinema is licensed under a Creative Commons Attribution-Share Alike 3.0 Unported License.
Based on a work from this source