G-Dragon, T.O.P and LeeSSang to perform at Xmas party 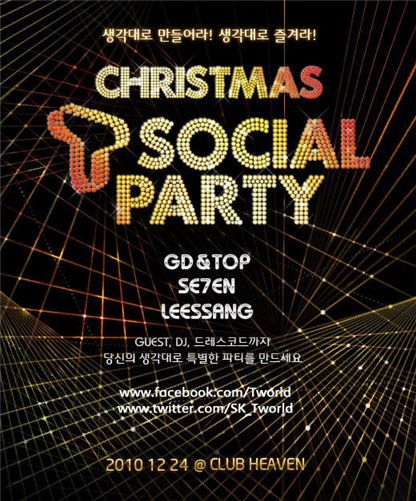 Some of the biggest names in the K-pop scene will be performing on stage at a Christmas party hosted by a communications company in Korea.

A press release from the party's publicist Prain Inc. announced Tuesday that Big Bang members G-Dragon and T.O.P (Choi Seung-hyun), rap duo LeeSSang and Se7en will take the stage at a club in KangNam of Seoul for SK Telecom's "Christmas T Social Party" held on December 24.

"Music and music videos are spreading all over the world through the evolution of the social media network and we believe that the members of Big Bang, whose singing careers have branched out to other countries, represent that", an official from SK Telecom was quoted as saying.

For the first time ever, G-Dragon and T.O.P (Choi Seung-hyun) will sing the title track "High High" from their full-length release as a duo, which is set to hit stores next week.

An official from their agency YG Entertainment explained that the upcoming duo album and songs by the two will feature electronic, pop and hip-hop sounds which goes well with the club scene.

Late last month, Yang Hyun-suk, CEO and founder of YG Entertainment, announced that G-Dragon and T.O.P (Choi Seung-hyun) will return to the music scene first with their album as a unit, followed by youngest member Seungri with his solo single and then Big Bang.

Big Bang, discovered and trained by major talenthouse YG Entertainment, is known as one of the biggest names in the Korean pop industry, releasing hit songs "Dirty Cash", "With U", "Lies" and "Haru Haru".

Born Choi Dong-wook, Se7en was trained under YG Entertainment for four years before making his debut with his album "Just Listen" in 2003. He returned to the local music scene in mid-July with his album "Digital Bounce".

LeeSSang is Korean hip-hop duo composed of Gary and Gil. They formed in 2002, collaborating with Drunken Tiger, T and Big Mama King.

"G-Dragon, T.O.P and LeeSSang to perform at Xmas party "
by HanCinema is licensed under a Creative Commons Attribution-Share Alike 3.0 Unported License.
Based on a work from this source