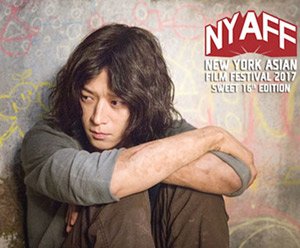 Actor Gang Dong-won received an award for his performance in "Vanishing Time: A Boy Who Returned" at this year's New York Asian Film Festival last week.

"Thank you for inviting me to this film festival and giving me such a huge honor", Gang Dong-won said in his acceptance speech. "It was an uncommon genre, but many people worked hard together to make the film. I'm happy to be able to meet audiences in New York".

He is currently working on the new film "1987: When the Day Comes" about the 1987 pro-democracy movement in Korea, and preparing for another project "Illang : The Wolf Brigade" based on the Japanese animated film "Jin-Roh" by Kim Jee-woon.

"Gang Dong-won Receives Award at New York Asian Film Festival"
by HanCinema is licensed under a Creative Commons Attribution-Share Alike 3.0 Unported License.
Based on a work from this source