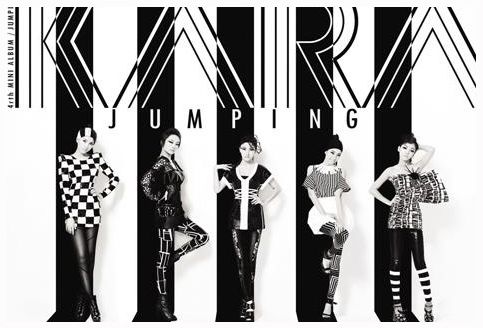 Kara, who has created huge popularity for Korean girl groups in Japan, will release a new album entitled "JUMPING" both in Korea and Japan.

Their agency DSP Media said on November 5, "The new album entitled 'JUMPING' will be released in Japan on November 10 as their second single album in Japan, and in Korea in the middle of this month as their fourth mini album.

The title song "JUMPING", which falls in the pop dance genre, was produced by the music composers Han Jae Ho and Kim Seung Soo, who had written Kara's hit songs such as "Lupin" and "Pretty Girl". The song will be sung in Japanese for the single to be released in Japan.

People in the music industry are paying attention to Kara, who has successfully advanced to Japan during a break in Korea, to find out whether their new album can have a successful result in both Korea and Japan. Kara had ranked in fifth place on the Oricon weekly chart with their debut album "Mister" in Japan, and had been included in the top ten singers for the first time for Asian girl groups. In addition, they released their best album entitled "Kara Best 2007-2010" last September, and it had ranked in second place both on the daily chart and the weekly chart.

A person in Korean music industry said, "Up until now, singers such as BoA and Dong Bang Shin Ki had released songs written by Japanese music composers for their activities in Japan, but Kara has gained popularity in Japan with songs written by Korean music composers, so their successful record in Japan is much more meaningful. I am also anticipating great success for their new song 'JUMPING'."

On the new album jacket, which had been disclosed on November 5, members of Kara wear black and white costumes with geometric features and reveal a charismatic image totally different from their previous cute and pleasant image. The teaser video is planned to be unveiled on November 8 through Korean Internet music websites such as Mnet.com, Melon, Naver, Dosirak, and Gom TV.

"Girl Group Kara to Release New Album 'JUMPING' in Korea and Japan"
by HanCinema is licensed under a Creative Commons Attribution-Share Alike 3.0 Unported License.
Based on a work from this source