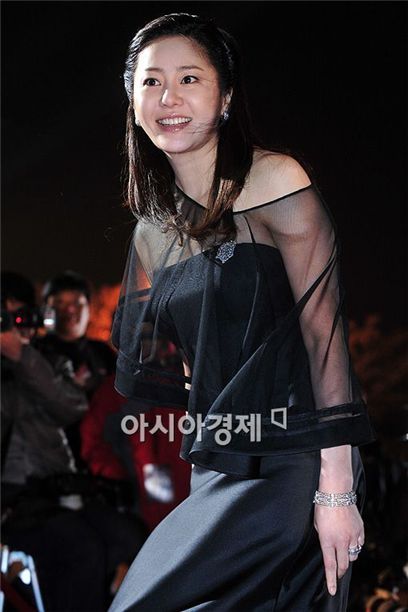 Ko claimed the top crown in the TV category for her portrayal of royal concubine Mi-shil in historical drama "Queen Seon-deok" while producer Yoon was awarded the same honor in the film category.

KBS2 TV's blockbuster drama "IRIS", which starred a handful of A-list Korean actors including Lee Byung-hun and Kim Tae-hee, was named the best drama at the event. Lee also picked up the best actor trophy for his lead role.

MBC TV series "My Wife is a Superwoman" also scored a double win at the ceremony -- best director and best actress trophy for Kim Nam-joo.

In the film category, sports flick "Take Off" was named the best picture and its lead actor Ha Jung-woo was awarded best actor.

Actress Ha Ji-won took the best actress title for her role in "Closer to Heaven" while her "Haeundae" co-star Lee Min-ki won for best new actor.

"Go Hyun-jung, "Haeundae" win grand prize at PaekSang Arts Awards"
by HanCinema is licensed under a Creative Commons Attribution-Share Alike 3.0 Unported License.
Based on a work from this source