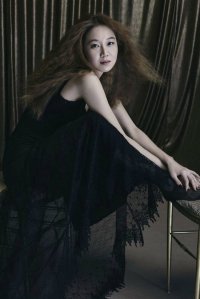 Rudy red face, frizzy hair, criminal fashion sense and a chronic case of inferiority complex and hopeless delusion, Miss Hongdangmu (carrot) is a new antihero among antiheroes. Such a pitiful role can be crafted with grace only by South Korean actress Gong Hyo-jin, who trades in her stylish image for a makeover as shocking as Charlize Theron a la "Monster".

Premiering Saturday at the 13th Pusan (Busan) International Film Festival (PIFF), "Crush and Blush" signals the promising directorial debut of Lee Kyoung-mi as well as feted filmmaker Park Chan-wook's headway into producing. Lee, who had worked on the set of Park's "Sympathy for Lady Vengeance", brings one of those rare movies that are propelled by a most unusual yet utterly believable character development, where the protagonist pushes forth the narrative by fulfilling her own destiny instead of a set of circumstances requiring a particular role.

The film wastes no time in painting an unmistakable caricature of Miss Hongdangmu. One is immediately struck by the awkward presence of the unpopular high school Russian teacher who is always looking in all the wrong places at the wrong time. She's like a cross between MTV's Daria and Morticia of the Addams Family, but neither smartly cynical nor eerily gothic, she dispels the golden rule in fashion that black goes with everything, as her uncomfortable looking turtleneck and shapeless long skirt only highlight her severe problem of going red in the face.

The unattractive 29-year-old had been infatuated with Mr. Seo (Lee Jong-hyuk), her high school teacher-turned-colleague, for about 10 years. "Last year he sat next to me at the faculty dinner and also right next to me in the car on The Way Home. Clearly he must be in love with me!" insists this paragon of delusion. However, her happy thoughts are short-lived due to the arrival of every women's public enemy, the pretty woman Yu-ri (played by lovely debutant Hwang Woo-seul-hye 황우슬혜).

As Russian becomes increasingly less popular among the students, hardworking Mi-suk is assigned to instruct junior high English while Yu-ri, lax yet popular, maintains her position in high school Russian. Not only is she forced to learn English to teach it, Mi-suk must put a halt to a blooming romance between Yu-ri and Mr. Seo, who is among the beauty's many admirers. Her only hope is to keep Seo tied to his marriage for the meantime, and she forms an odd alliance with Seo's daughter and middle school loser Jong-heui (Seo Woo).

Rising starlet Seo Woo is another reason to watch the movie. The petite actress, known for some oddball TV roles, plays the perfect counterpart to Kong as another social misfit with no less psychedelic charisma. The two eccentrics deliver a multidimensional tragicomedy, spiced with what would be the American equivalent of "blonde humor" inspired by the pretty Yu-ri. Along the way, the viewer develops sympathy for the clueless Mr. Seo who gets caught in the middle of four feisty ladies (the fourth being his scary belly-dancing wife who is eight years his senior).

"Crush and Blush" brings together the most unusual characters in the most embarrassing situations. Mi-suk starts digging a hole in the school yard as to divert eyes away from her "clandestine" talk with Jong-heui, but only draws more attention to herself _ physically manifesting her shortsighted "sapjil", meaning hard shoveling and no pay, both literally and figuratively. Yet the viewer cannot help but warm to this self-esteem-less, frustrating character as she pursues her passions with utmost sincerity and futility. But life can surprise you, as the most meaningful secrets lie in things that may seem meaningless.

In theaters Oct. 16. 101 minutes. 15 and over. Distributed by Big House-Vantage Holdings.

"Gong Hyo-jin Shines in 'Crush'"
by HanCinema is licensed under a Creative Commons Attribution-Share Alike 3.0 Unported License.
Based on a work from this source