Gong Yoo to Leave For the Military Next Year 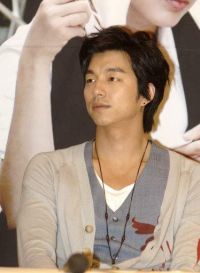 Gong Yoo, 28, the heartthrob of the recent hit drama "Coffee Prince", will temporarily say goodbye to his fans to serve in the military Jan. 14, 2008.

"Gong will start five weeks of basic training for his military service at the Nonsan training center in South Chungcheong Province", said his agency, Sidus HQ.

The actor has been in numerous films such as "She's on Duty", "S Diary" and dramas like "One Fine Day", but his popularity peaked with "Coffee Prince". He especially became one of the favored actors among young women for his exquisite fashion sense and model-like figure.

"I am grateful for my fans, and I will do my best to successfully complete my service and return to make better films", he said through his agency.

Meanwhile, Gong was nominated for the "Best Actor", "Most Popular Actor by Netizens", and the "Favorite On Screen Couple Award" with Yoon Eun-hye ― his co-star in "Coffee Prince" ― at the MBC Drama Awards.

"Gong Yoo to Leave For the Military Next Year"
by HanCinema is licensed under a Creative Commons Attribution-Share Alike 3.0 Unported License.
Based on a work from this source