Goryeo: the dynasty that offered Korea its name 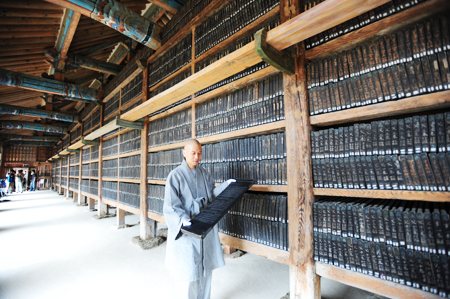 This is the fifth of a 10-part series on Korean history from its mythological, ancient beginning until the present day. This project is sponsored by several companies and public agencies including Merck Korea, eBay Korea, Daewoo Securities and Korea Post. - ED.

For over a millennium the Three-Kingdom struggles on the Korean Peninsula led to unification twice ― firstly, by Silla in the 7th century and secondly, by Goryeo in the 10th century.

Goryeo is regarded as being particularly significant in Korea's long history for many reasons, but there are two which stand above all the rest: Korea was named after this dynasty, which lasted almost five centuries, and the current territory of the entire Korean Peninsula is not that different from that of the end of the Goryeo dynasty.

It also boasts a pair of special cultural products, Goryeo celadon, celebrated for its beauty and craftsmanship, and the Tripitaka Koreana, well known for its contribution to Buddhism and the history of the printed word.

Silla, which managed to carry out incomplete unification in 676, lost its grip on regional affairs during the late 9th century when a host of local overlords sprouted up to negate the authority of the central government.

Two powerful overlords Gung Ye and Gyeon Hwon emerged to prominence thanks to their leadership and their goals for restoring regional sovereignty, which reflected former regional differences.

The former vowed to succeed Goguryeo, while the later declared himself as a successor of Baekje.

Along with the ever-weakening Silla, these two recreated the era of the Later Three Kingdoms. Nevertheless, the eventual winner in the three-way rivalry was Wang Geon, a former subordinate of Gung Ye.

Gung Ye was once a charismatic leader who was surrounded by many talents including Wang Geon as a general. But after quite a while at the helm, he showed very eccentric activities like claiming himself as a living Buddha and killing his wife and children.

These prompted him to lose credibility, thus leading Wang Geun to revolt and overthrow him and found Goryeo in 918. 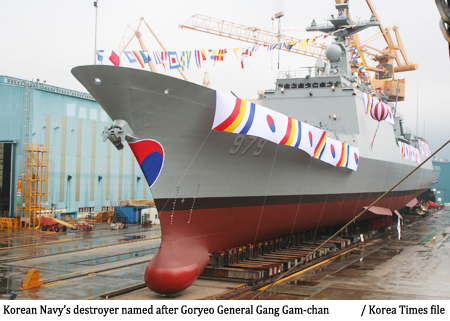 Wang defeated Gyeon Hwon in 936, a year after annexing Silla, which gave up its 1,000 year-old dynasty to Wang, who in turn allowed Silla's royal family to govern their areas in former Silla and keep their dignity.

After the unification, Wang moved the new country's capital to his hometown Gaeseong, which now accommodates an industrial complex set up as a result of Nobel Peace Prize recipient and former South Korean President Kim Dae Jung's Sunshine Policy of cooperation between the two countries.

The whole story was featured in a drama over the past few years, which had attracted great attention.

Wang, called King Taejo after his death, came up with three major policies of integrating the entire nation, respecting Buddhism and expanding its territory northward, which continued throughout the Goryeo Dynasty over the next centuries.

Buddhism flourished under Wang and the Goryeo period and produced great Buddhist thinkers such as Uicheon and Jinul and many beautiful temples were constructed. 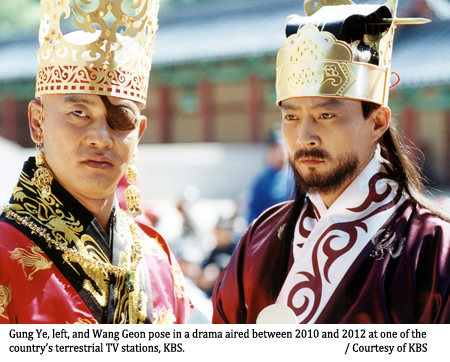 The name "Goryeo" was derived from the ancient Korean kingdom "Goguryeo", discussed in the first part of this series. Wang expressed his antagonism against the Khitan, which destroyed the northern Korean state of Balhae in 926, the successor of Goguryeo.

In the early 10th century, the Khitan rose to power in Manchuria to set up the Liao Dynasty in 938. Four years later, it sent 50 camels with its envoys in an attempt to set up diplomatic relations with Goryeo, but Wang starved the camels to death and exiled the envoys.

Wang reiterated its anti-Khitan policy in his Ten Injunctions, the special laws and recommendations dedicated to his successors.

By contrast, Wang was very lenient to ethnic Koreans. On top of respecting the Silla aristocracy, Wang left most provincial leaders undisturbed. In addition, the founding king strengthened relationships with them through a host of marriages with daughters of local clans.

Wang also embraced refugees from Balhae. Such an approach offered legitimacy to the Goryeo Dynasty, which enabled Wang's descendants to establish the infrastructure of a Confucian state.

The Ten Injunctions named Buddhism as the state religion, but also insisted on the study of the Confucian classics. While Buddhism exerted great influence on Goryeo, as far as the political system was concerned, the country was built and operated under a strict Confucian model involving civil service exams, Confucian bureaucratic systems and even had a national Confucian academy called Gukjagam.

Understandably, the anti-Khitan policy angered the Liao Dynasty, which invaded Goryeo three times at the dawn of the second millennium, but Goryeo overwhelmed their enemy, finally defeating them and causing them to surrender.

The most outstanding war hero from this period was General Gang Gam-chan who, ordered the destruction of a makeshift dam in order to sweep away the Khitans who were midway across a river.

In recognition of his feats, the Korean Navy named a destroyer after him in 2006.

A group of army officials succeeded with a rebellion to start a military dictatorship whose commanders were replaced three times in bloody activities in less than two decades before Choi Chung-heon took power in 1197.

Over the next 60 years, Choi and his offspring controlled the country under a few nominal kings until 1258 when the military dictatorship finished after the death of Choi's grand grandson.

Amid the Choi family's reign, the Mongols attacked Goryeo, which withstood invasions for almost 30 years by even moving its capital to the western island of Ganghwa, before it finally sued for peace in 1259.

In return, Goryeo had to endure a series of humiliating measures including the downgrade of Goryeo monarchs' titles and the forced marriage of Goryeo princes with princesses of the Mongolian Yuan Dynasty.

With Mongol troops stationed at the capital of Goryeo, Yuan actively engaged in the politics of the Korean Peninsula.

Goryeo managed to survive this difficult period and regained its sovereignty midway through the 14th century when Yuan faded away so as to carry out a series of reformative policies.

However, its national prowess had weakened too much under the century-long Mongolian influence to regain its past glory and it met its end in 1392 at the hands of one of its own generals, Yi Seong-gye.

Although the war against Mongols devastated Goryeo, it also led to a period of great cultural production. The most significant cultural asset produced was the carving of the Buddhist texts known as the Tripitaka Koreana, which people believed would protect them from Mongol invasions.

The importance of the Tripitaka Koreana cannot be over-emphasized: it is the world's most comprehensive and oldest intact version of the entire Buddhist scriptures and it is written in Chinese characters comprising more than 52 million individual characters, without any known typos.

The scriptures are carved onto more than 80,000 wooden printing blocks and are held in the magnificent Haeinsa Temple in southern Korea where they remain in an almost perfect state despite no high-tech storage devices after several centuries.

They are designated as the National Treasure No. 32 of Korea, and Haeinsa Temple's facilities, which hold them, are UNESCO World Heritage sites.

With regards to printing, Goryeo was definitely advanced, more than Europe at that time. On top of the Tripitaka Koreana, which was carved onto wooden blocks, the medieval state came up with the technology of moveable metal print.

Historical records note that Goryeo printed its first book based on this innovative method in 1234, but the oldest extant book printed with this technology is Jikji (a Buddhist text), which dates back to 1377.

Still, it pre-dates to the printing of the famous Gutenberg Bible in the 1450s by the Western hero of printing Johannes Gutenberg _ by about three quarters of a century as confirmed by UNESCO in 2001. Unfortunately, only one copy remains, and it is kept in the National Library of France.

In addition, the current national name of Korea was known to the West thanks to Goryeo's openness _ Arabian merchants carried out regular trading with Goryeo seeking such items as its famous green-grey colored Celadon pottery and Korea's red ginseng, celebrated for its manifold health benefits.

It was through their pronunciation of Goryeo as "Korea" that this relatively small peninsula in East Asia became known to the world.

Dr. Kevin N. Cawley is currently the Director of the Irish Institute of Korean Studies at University College Cork (UCC), Ireland ― the only institute in Ireland dedicated to promoting Korean studies ― funded by the Academy of Korean Studies, South Korea. He was previously a Gyujanggak Fellow at Seoul National University.

The Late Three Kingdoms:
Three-way rivalry in the late 9th and early 10th century in the Korean Peninsula

Gung Ye, Gyeong Hwon:
Rebel leaders who revolted against Silla so as to proclaim as successors of Gogurye and Baekje in the era of Late Three Kingdoms

Balhae (AD698-926):
A Manchurian kingdom set up after the collapse of Goguryeo

Gukjagam:
The national university of Goryeo, which is equivalent to Seonggyungwan in Joseon Dynasty

Liao Dynasty (907-1125):
A Khitan empire that ruled over the regions of Manchuria, Mongolia and parts of northeast China

General Gang Gam-chan (948~1031):
As one of the greatest army leaders in the Korean history, he helped Goryeo defeat invading forces from the Liao Dynasty in the early 11th century.

Choi Chung-heon (1149~1219):
An army general of Goryeo who took the power in 1197. Over the next 60 years he and his three offspring practically controlled the country.

Ganghwa Island:
An island west of Seoul where Goryeo took over Mongolian invaders in the 13th century

Haeinsa Temple:
One of the most famous Buddhist temples in Korea. The temple located in Hapcheon, South Gyeongsang Province was founded in early 9th century.

Goguryeo (BC37-AD668):
An ancient Korean kingdom in the northern Korean Peninsula and Manchuria