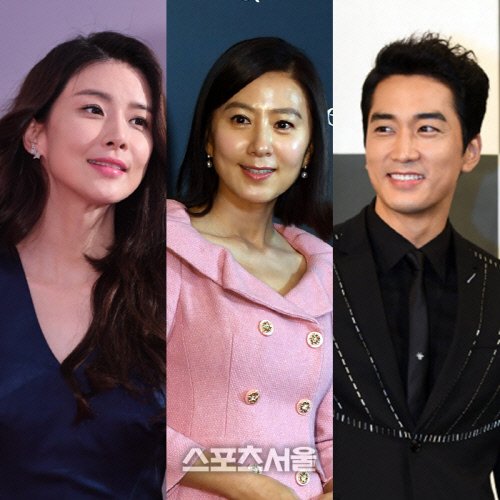 For an actor, winning the grand prize is an honor everyone dreams of. This is because it is an honor for being the best actor with not only their acting skills, but also a box office hit. Actors who win the grand prize have long established themselves as 'trusted actors'. A star-studded lineup is on its way and exciting viewers.

Lee Bo-young, who won the SBS Best Actress in 2013, is returning with the tvN drama "When My Love Blooms" on the 18th of April. She plays Yoon Ji-soo in this melodramatic story about a woman in her 40s coming face to face with her first love. Her working-mom character stands alongside Yoo Ji-tae in this drama.

Lee Bo-young just had her second child last year and is returning with "When My Love Blooms". She displayed calm and deep acting through "Mother - Drama" and "I Hear Your Voice" and now she's coming back with a new mellow mood.

Kim Hee-ae, who won the MBC Best Actress in 1991 and the SBS Best Actress in 2007 is coming back with the jTBC drama "The World of the Married" for the first time in 4 years.

Based on the English BBC series "Doctor Foster", "The World of the Married" is about a married couple's endless whirlpool of revenge that begins with betrayal. The intense world of couples strangling each other in the midst of exploding love and hatred is depicted in detail.

Kim Hee-ae's role of her lifetime is known to be the 2014 jTBC drama "Secret Love Affair" and the fact that she's making a comeback with director Mo Wan-il, who produced "Misty", creates huge anticipation.

MBC Best Actor of 2008 Song Seung-heon is also coming back with a romantic drama called "Shall We Have Dinner Together?". This will be Song Seung-heon's first drama in 7 years on MBC. "Shall We Have Dinner Together?" is based on a webtoon of the same name about a man and a woman who are used to being alone, recovering their emotions through 'dinner'.

Song Seung-heon takes on the role of a psychiatrist and food psychologist Kim Hae-kyeong. He's gentle, but spiteful with love for humans. The drama is more looked forward to because it is Song Seung-heon who has stood out with mellow and romace.

"Grand Prize Actors Lee Bo-young, Kim Hee-ae and Song Seung-heon Are Coming"
by HanCinema is licensed under a Creative Commons Attribution-Share Alike 3.0 Unported License.
Based on a work from this source