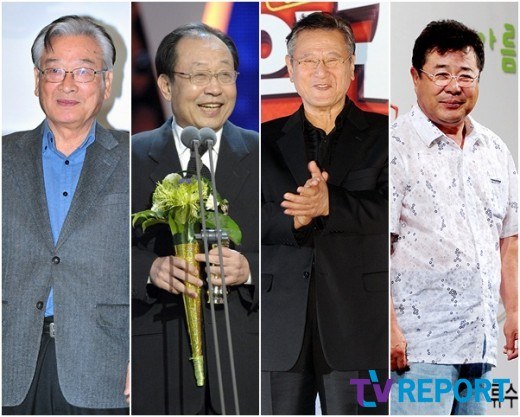 Na Yeong-seok's "Grandpa Over Flowers" were surprised at their additional member Park Geun-hyung.

A CJ E&M official claimed the first shooting of the new TV program "Grandpa Over Flowers" has started. Lee Soon-jae, Shin Goo, Baek Il-sub and Park Geun-hyung have come together for the first time.

Apparently the first three were surprised and happy to see Park Geun-hyung.

"Grandpa Over Flowers" is a backpacking concept. It is also producer Na Yeong-seok's first entertainment program since he moved to CJ E&M. He also reunited with writer Lee Woo-jeong-II with whom he showed excellent teamwork in the KBS program "1 Night 2 Days". The first trip starts on the 2nd of June to Swiss and France.

""Grandpa Over Flowers" Lee Soon-jae, Shin Goo, Baek Il-sub and Park Geun-hyung"
by HanCinema is licensed under a Creative Commons Attribution-Share Alike 3.0 Unported License.
Based on a work from this source