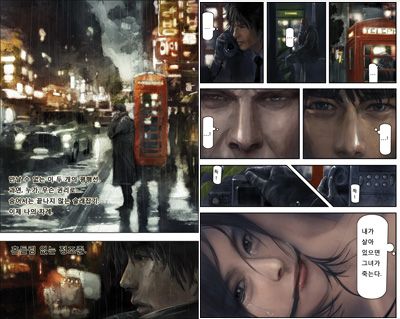 In the past, comics were regarded as the genre for maniacs, mostly children or nerdy adolescents, with fantasy or superheroes stories. However, recently, the traditional comic industry has waned probably prompted by the advent of the digital era.

Instead, a graphic novel, which remains relatively unfamiliar in Korea despite a rapid global spreading, is knocking on the door of the local publishing industry.

Often called "comics for adults",the graphic novel is similar in a conventional comic format with reliance on images but with more subtle, artistic quality alongside mature and serious themes. It has a longer storyline and a complicated plot akin to the novel structures, usually packed with a hardcover.

The Creek and River Korea and the Taewon Entertainment will publish a graphic novel based on the popular television drama series "IRIS" starring hallyu star Lee Byung-hun and top actress Kim Tae-hee. The drama broadcast here last year and now is airing in Japan.

The graphic novel will be published around September first in Japan right after the end of drama series to end and then available in Korea, according to the Creek and River Korea

In other countries, the graphic novels are first created and then made into other genres such as television dramas and films but not in Korea with the graphic novel development in a fledging state.

"The graphic novel is still very new in Korea. So we have to create it with more familiar subject like the popular drama content. The graphic novel of "IRIS" was planned when the drama was being aired",Youk Yoen-sik, director of the creator agency, said.

In the graphic novel version of the drama, the images portraying the main characters Hyun-jun played by Lee and Seung-hee played by Kim will be kept but the story will be different from the original drama.

The main plot is based on a love line between Hyun-jun and Seung-hee and added with new characters and fictional elements, which were not portrayed on the small screen.

"As the graphic novel is usually limited to the short story with less than 100 pages, we have to trim the storyline fitted for the format. Our work is another creation", he said.

The traditional comics were usually for just reading but the graphic novels are mostly for the collection. "The beauty of the genre is very delicate, high-quality and artistic. So the works are regarded as the collection item for readers", he said.

Youk added that the current comic industry has required the change of the concept to brace for the digital era. "We can use the graphic novels for smartphones and other digital devices as their visual images are very appealing to the users. It is the future of the comic industry",he said.

The graphic novel production requires more time, seven to eight times than the traditional comic books do, with much more cost and a compact but intensive storyline.

"The quality of the illustration is very artistic, close to the paintings. So individuals are willing to collect them", he said.

Youk said that the company is considering adapting the upcoming drama "Buddy Buddy" into a graphic novel as the next project. "The future of the graphic novel is very promising, I think. In Korea the graphic novel is a medium of once-source-multiuse of the drama or film to the literature territory. It is a blessing both for the literature and comic industry", he said.
___________
The 2009 hit television drama "IRIS" has been adapted into a graphic novel, pages of which are shown above. The book will be published in Japan and Korea. / Courtesy of Creek and River Korea