Groom-to-be Ji Sung walks around with a bloody hand 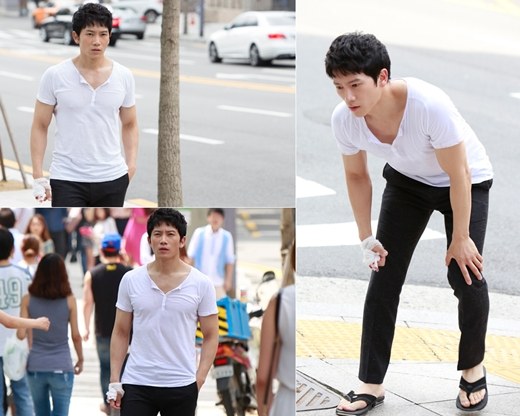 He was filming a scene from the new KBS 2TV drama "Secrets" where he plays a man named Min-hyeok who falls in love with a woman who killed his lover.

Ji Sung in the pictures doesn't seem like the groom that he is who recently took his wedding pictures. In one picture, he looks like he's about the collapse and in another he's looking fierce.

This scene was taken in Gangnam somewhere of Ji Sung wandering on the street in despair of having lost his lover in an accident.

The production of "Secrets" claims, "Ji Sung has been possessed with the character of Min-hyeok to the maximum and his team work with Hwang Jung-eum is more than asked for as they are close".

Meanwhile, "Secrets" will be aired for the first time on the 25th after "Sword and Flower".

"Groom-to-be Ji Sung walks around with a bloody hand"
by HanCinema is licensed under a Creative Commons Attribution-Share Alike 3.0 Unported License.
Based on a work from this source