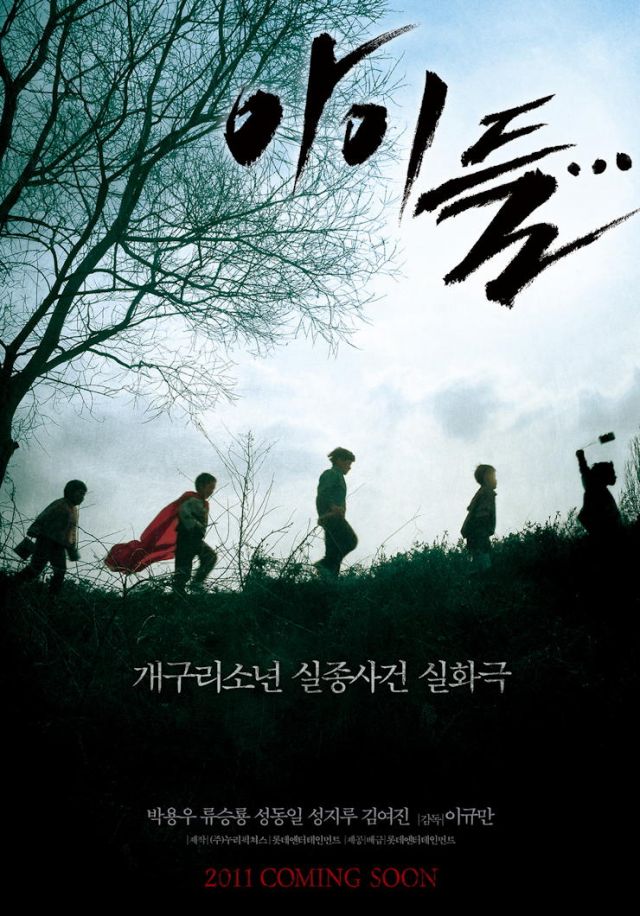 The film is based on an actual unsolved case that shocked the nation for over a decade, and regarded the disappearance of five kids, from 9 to 13 years old, in the Daegu Mountains in 1991.

The children (U Cheol-won, Jo Ho-yeon, Kim Yeong-gyu, Park Chan-in and Kim Jong-sik) were living in a village near Mt. Waryong and on the 26th of that year decided to head to the mountain to search for salamander eggs, following a path that begun in the back of their school. After failing to return for several hours, their worried parents called the police. The authorities though, were certain that it was a usual case of children getting away for a few days and then returning, and they did not proceed to a formal investigation, despite the parents' pleas.

A few days later, and after the pleas from their parents became public, the case became of national concern. President Roh Tae-woo sent 300,000 police officers to comb the whole area, with the investigation being nationally televised. The search extended to bus and train stations in the whole country. Corporations, teams and individuals donated ₩42 million as a reward for anyone who could find them. Children in local schools organized a campaign (Find the Frog Children Campaign) and photographs of the five children were printed on milk cardboard boxes. Many of the parents, devastated, abandoned their works to search for their kids everywhere in the country. More than 8 million flyers were distributed all over S. Korea. 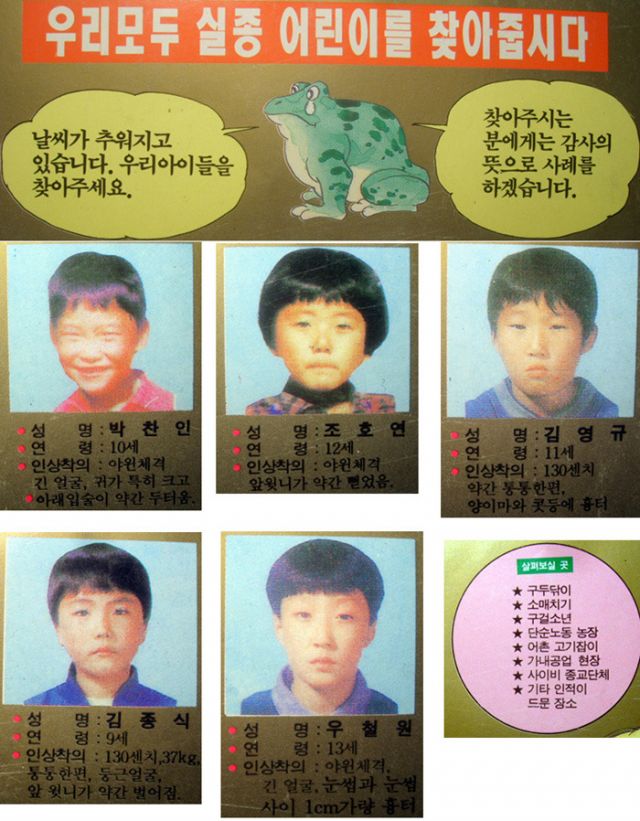 A year later, the film "Frog Boys" was screened, in order to persuade the children to return, since they were many who believed that they had simply abandoned their homes. A special police investigation team was assigned exclusively to the case until 2001, having searched the mountain over 500 times, without being able to find a single clue, though. Expectantly, extreme theories started to surface:  abduction from aliens, from North Koreans, from scientists for secret experiments, while there were even those who suggested that the parents have killed their children and then buried them. During this time, the police received more than 550 wrong notices.

On November 26, 2002, a man picking acorns in the mountain discovered pieces of clothes that eventually led to the discovery of the bodies in a ditch. Their bodies were jointed and seemed like they died while hugging each other, with the police assuming that they froze to death. However, since they were situated just 3,5 kilometers away from their homes, in a spot where they see the city lights and hear the sound of cars, the theory that they had just been lost soon crumbled.

Furthermore, and after extensive investigations in the surrounding area, a number of bullet shells were discovered, the children proved to be tied up, and had head injuries from a pointed instrument. The moss on their skulls suggested that someone had buried them in a hurry, with the bodies coming to light because rainwater removed the soil that covered the ditch.

The discovery, once again, instigated a number of theories. However, the investigation proved that some psychopath probably murdered the children. The fact that he had buried them in an area where the ground is quite hard showed that the crime was premeditated and that the perpetrator had time to bring his tools from somewhere.

Despite promises by the police for solving the crime, in 2006, the case file had to close, since the statute of limitations expired. The perpetrator was never found. 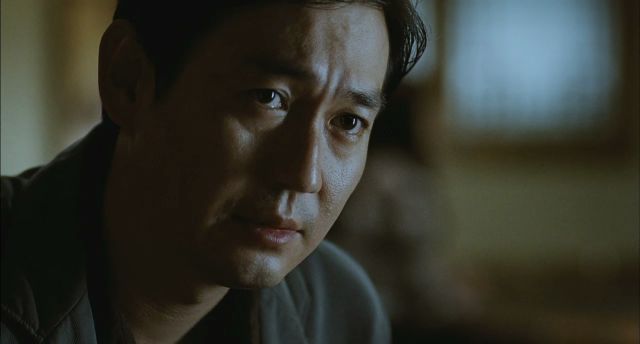 The script stays very close to the facts, although it adds some elements of fiction. In that aspect, "Children..." revolves around Kang Ji-seung, a celebrated documentarian who is ostracized from Seoul to Daegu when a fraud is revealed regarding his works. The aforementioned incident takes place during his first days in the area, and he decides to shoot a documentary on the subject, despite the objections of the channel's director. 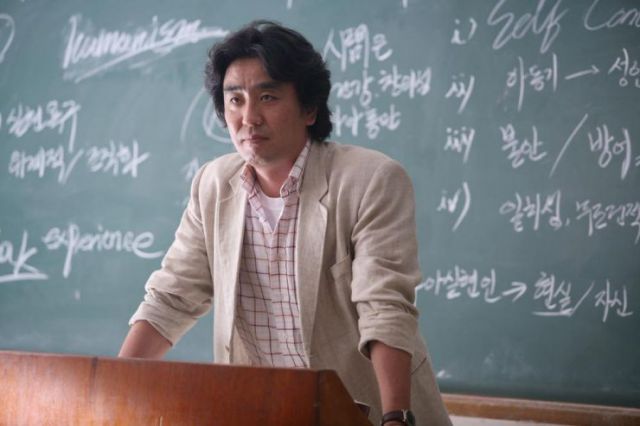 During his investigation, he stumbles upon Hwang Woo-hyeok, a professor of psychology who teaches at the local university and has a theory regarding the incident that nobody wants to utter. Due to a strange call received by the parents of Jong-ho (one of the kidnapped), and their unusual reaction, he is convinced that they are the perpetrators, a theory Ji-seung also embraces after meeting with them.

Lee Kyoo-man directed and co-wrote a film that excels in the depiction of the various characters, particularly in Jong-ho's parents, in the whole concept of the grandmother character, and in Hwang Woo-hyeok. The continuous flashbacks he presents are not tiresome, but helpful in the progression of the plot. At some points, he obviously over-dramatizes the situation, although that is justified, in a case that shocked the whole nation.

The script has some flaws, particularly in the last part where it strays from the actual case, though not to a degree to ruin the rest of the 132-minute film.

Park Yong-woo is consisted in his depiction of Kang Ji-seung, without disappointing nor making an impression, since his role is not so demanding, apart from the last part of the film. On the other hand, Ryu Seung-ryong as Hwang Woo-hyeok is impressive. His depiction of a man who transforms from accuser to accused is so stunning, that there are moments when he appears the most tragic figure in the film, even surpassing the parents. His performance is one of the picture's biggest assets. Sung Ji-ru and Kim Yeo-jin, who play Jong-ho's parents, are also impressive in their respective parts. 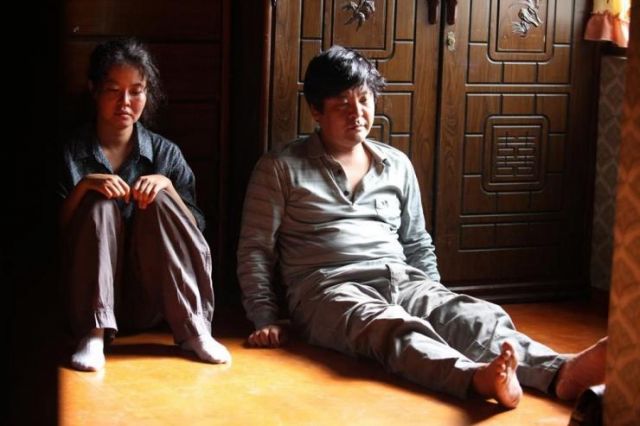 The cinematography by Ki Se-hoon is also a point of excellence, with the depiction of the various eras and the rural area the film takes place in being accurate and visually impressive. Kim Hyeong-ju has done a great job in editing, despite the fact that he had a difficult task with the many flashbacks, which he managed to blend artfully in the script. 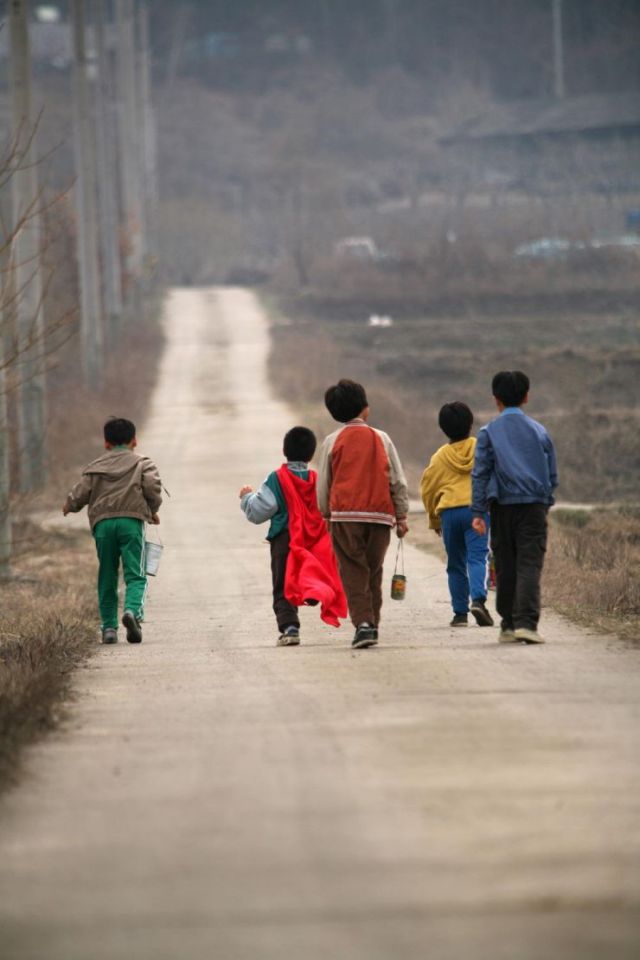 Overall, "Children..." is a great film, which excels in all aspects, with the sole exception of the last part, which actually deprives it of masterpiece status. It is also a good chance for the spectator to discover a case that shocked the country for more than a decade.