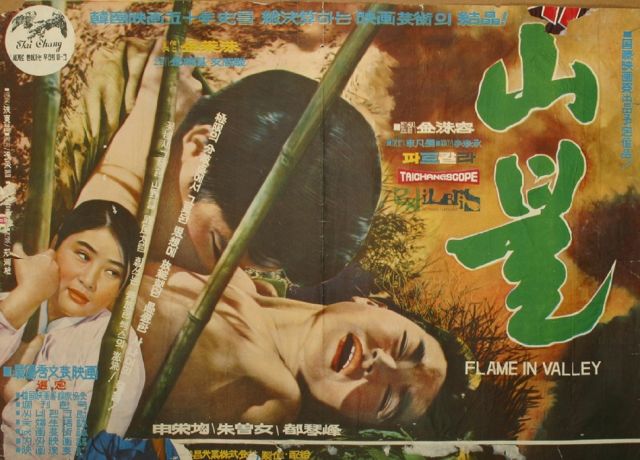 Winner of the Best Film award at the 1967 Blue Dragon, "Flame in the Valley" is a quintessential anti-war movie, and one of the best titles I have watched in my "endeavors" with the Korean Classic Film Archive.

The story takes place in a village in Jirisan Mountains in the early 50s, during the Korean War, and revolves around a village almost exclusively inhabited by war widows, with the exception of an older senile man. The two main protagonists are Jeom-rye and Sa-wol, who live across each other. Jeom-rye has to take care of her mother-in-law who is also a widow, the aforementioned senile grandfather-in-law, and a mentally deranged sister-in-law. Sa-wol lives with her mother. The two women have a lot to fight over, theoretically at least, since Sa-wol's husband fought for the North and Sa-wol's for the South. Eventually, Jeom-rye stumbles upon a communist soldier, Gyoo-bok, who is hiding in the area (Jirisan is in South Korea) and proceeds on beginning a sexual relationship with him. Sa-wol eventually finds out and blackmails both lovers, the soldier to have sex with her and her "adversary" to continue keeping his existence a secret. The two women form a rather peculiar truce as they use Gyoo-bok as a sexual tool, but their arrangement does not hold for long, as South troops reach the area, and violence ensues.

Kim Soo-yong takes the myth of Lysistrata and adapts it to a Korean setting, in order to present a multi-level anti-war theme and a number of social comments. The blight of war, particularly regarding the ones left behind is the most obvious one, with the basis of the film formed on the fact that women have to take over all the responsibilities men had, just in order to survive. Kim seems to mock the concept of the two Koreas, metaphorically, through the two main protagonists, who live across a narrow "street" but are in essence enemies, due to the civil war. The fact that what makes them come together eventually, is the longing for a man, and in essence, sex, also moves in the same, mocking path, as it also highlights the fact that, despite the side picked, the two characters are, in essence, the same, as is the case regarding North and South Koreans (at least at the time). Another aspect that moves towards irony is that the man in the film eventually becomes a tool, totally dominated by the two women, in a concept radically opposite than the actual circumstances between men and women in Korea. 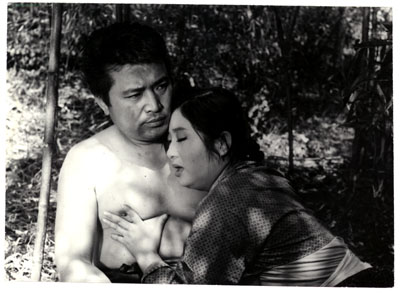 On the other hand, Kim also presents the women's lust as a sin that eventually has tremendous consequences on all involved, in an element that transforms the film into a tragedy (Lysistrata was actually a comedy), despite the ending that seems to refer to a new beginning. This concept also presents another comment, this time about human nature, which Kim seems to consider as dominated by instincts, rather than logic.

Lastly, Kim also highlights the difficulties of living in the mountainous, rural areas of Korea, where the struggle for survival is an everyday feat, war or no war.

The entertainment the film provides benefits the most by Yu Jae-won's editing, who implements a quite fast pace through the almost constant succession of camera angles (during the dialogues) and different scenes. Hong Dong-hyuk's black-and-white cinematography is also excellent, with him presenting a number of images of extreme beauty in the bucolic setting, while his presentation of the village is quite realistic. The only in-color sequence in the movie also works quite well, again in a fashion that seems to mock the tendency of the future presented in color and the past in black-in-white, while the rhombus framing definitely stays on memory.

The acting is also on a very high level, headed by the two great ladies, Ju Jeung-ryu as Jeom-rye and Do Kum-bong as Sa-wol, who give impressive performances as adversaries. Shin Young-kyun as Gyoo-bok is convincing as a man who finds himself afloat the wishes of the two women with no choice but to succumb to their "appetites", while the father-in-law (I could not find his actual name) gives a hilarious performance, again in mocking fashion.

"Flame in the Valley" is a masterpiece, a film that has it all: comedy, drama, social commentary, anti-war messages, great characters and great performances, in a package that manages to be equally entertaining and meaningful.