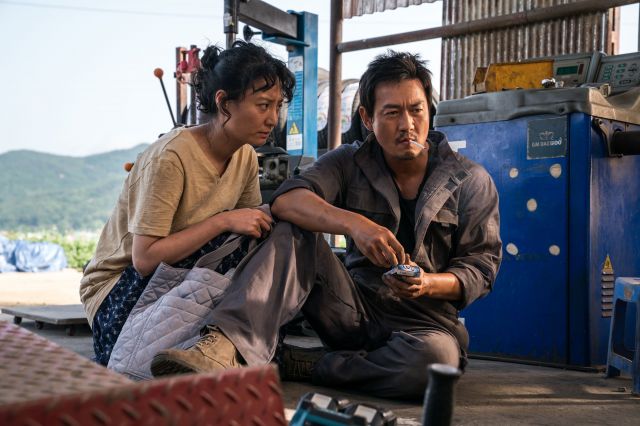 The high concept story behind "Nailed" is like an Alfred Hitchcock presents episode. It's such a quirky but limited idea that I couldn't see how they could make it into a 100 minute movie.

A decent married couple run Daheung Auto repair shop on the border with North Korea. Because of a recent housing development project near the main road, the area is flooded with trucks, which is bad for their business, because drivers no longer want to use the road. But when one of the cars hits a nail left on the road, he gets the idea to deliberately scatter the road with pieces of metal. Sure enough, he gets plenty of traffic to his repair shop, and soon he has enough money to buy a new sign and his wife can have her hair done stylishly.

The movie makes clear that these are not bad people. Sure, there is some illegality about what they do, which the movie acknowledges. But the drivers are mainly visitors from outside, as the husband points out, and if they can afford a vacation, they can easily pay 200,000 won for a tyre replacement. The first customers who come to the tyre repair shop are a bored young affluent couple driving an SUV - exactly the kind of people who, in the filmmaker's mind, probably deserve to get ripped off.

The other customers are members of the association and local politicians, who drive imported cars and seem to have a very large amount of banknotes in their car trunks. The characters who live in the town are even worse – incompetent cops and a shady business association led by Mr Mun. It turns out that he has a good idea about the couple's scheme but he has his own selfish reasons for not reporting them.

The mechanic is a good man then, just let down by a corrupt system. Losing out on business is just one of the indignities he suffers. He is not respected by his father-in law because of his failure to have a child, and he is not listened to by the police. Is it any wonder that he has to come up with his own scheme to beat a system that is bent and twisted?

If anything, he does it to gain respect, from the people who look down on him for having an auto-repair but no automobile. It's his wife who is eventually more drawn to the idea of making money for the sake of having a better life. He just wants to drive around with on his scooter with little Eunmi, the orphaned girl who works at the convenience store with her grandmother.