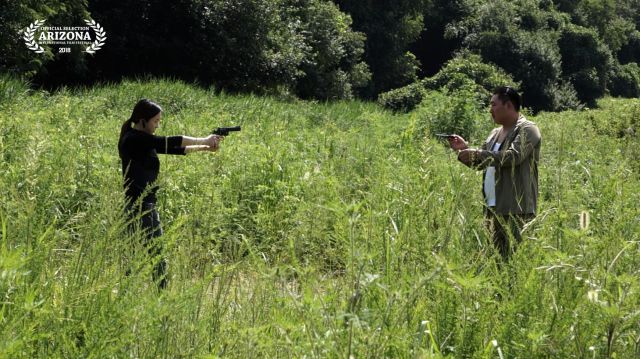 Oh In-chun has been quite prolific in the latest years, having released 3 films since the end of 2017. Evidently, his efforts seem to have paid off, since "The DMZ" seems to be his best film as of yet.

The Korean DMZ was created after the Korean Armistice Agreement following the Korean War, and it is an area of 4km between the North and the South, which is considered the most heavily guarded in the world. Oh In-chun choose to unfold his story in this area, using a simple script and a minimalistic approach.

Kwon Min-in is a female police officer who is chasing Mr Heo, a serial killer who has escaped from prison, only to find herself in the DMZ, and even more, having stepped on a mine, which deems her unable to move from her position. She only has a Bluetooth, her mobile phone and her gun to rely to, but the first two prove useless as a number of strange and even comic events occur while she is trying to notify her service of her situation. Furthermore, and in surrealist fashion, eventually a Japanese girl appears out of nowhere passing the area, while Mr Heo also appears after a fashion. A one-on-one cat and mouse game soon ensues.

Oh In-chun directs and pens a film that functions much like a stage play, since it takes place in only one location, with only three actors, indistinct minimalism. The movie begins as a quirky kind of comedy with surrealist elements, but particularly after Mr Heo appears, it turns into an agonizing thriller with some horror elements during the finale. This change of genres and approach benefits the production the most, particularly in entertainment terms, with the film offering much more in terms of context and story then its very basic premise implies. This sense is heightened even more by the fact that the focus changes on Mr Heo upon his appearance, whose paranoia is in direct opposition to Min-in's logic and resolve, with their vocal "Duel" being the highlight of the film.

Oh In-chun based the biggest part of his film on his actors, with Joo Min-ha (one of his regulars) as Min-in constantly changing attitudes that stretch from panic and frustration to calmness and courageous calculation with elaborateness. Kim Joon-seob as Mr Heo is the exact opposite, highlighting his paranoia with gusto, while his almost constant, Hollywood movie quotes provide a nice comic tone to his scenes. Hirota Masami as the Japanese girl gives a necessary relief to the "monotonous" nature of the movie, while her character also functions as the catalyst for the finale. 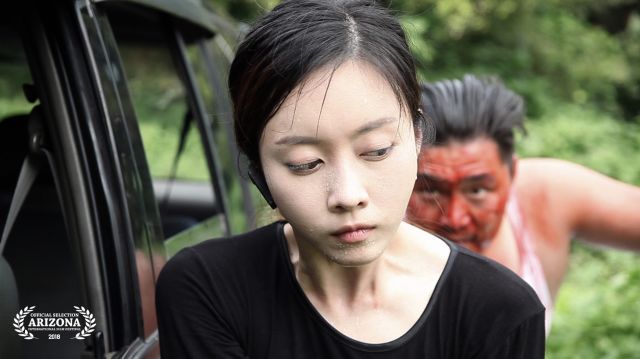 Oh In-chun and Kim Woo-hyun-I's editing gives a sense of movement with the constant cuts to the same scene, with the "swooshes" of sound heightening this sense in comic fashion, particularly in the beginning of the film. In general, the only fault I found is that the movie somewhat overextends its main concept in 90+ minutes, although this is definitely not enough to fault the overall value of the title.

"The DMZ" is a very rewarding thriller that manages to make the most of its simple premise and at the same time to highlight the director's prowess and the acting abilities of its protagonists.

"The DMZ" is directed by Oh In-chun and features Joo Min-ha, Kim Joon-seob and Hirota Masami.