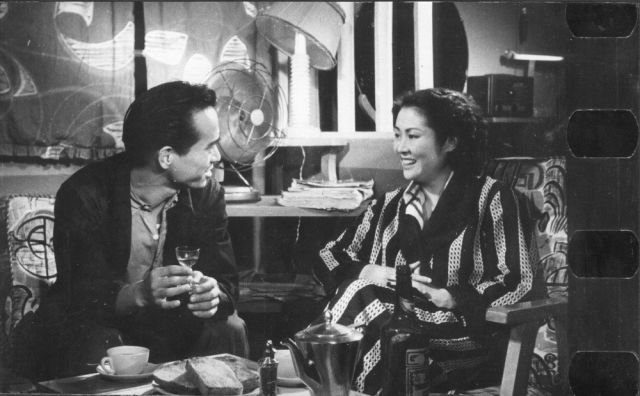 Films about the "underground" fights of the spy agencies of North and South Korea have been one of the most significant trends of contemporary Korean cinema. It is interesting, however, to look at how a movie like that would be presented in 1954, just a year after the ending of the Korean War, when the animosity between the two Koreas reached one of its apogees. Han Hyeong-mo presents exactly that with "The Hand of Destiny". Furthermore, the film presents the first onscreen kiss in a South Korean movie, an event which, reportedly, made the recipient housewives whose eyes were beholden to the screen to emit gasps during the infamous scene. (source: koreanfilm.org)

The story revolves around Margaret/Jeong-ae, a North Korean spy who poses as a cabaret girl in a Seoul parlor and Yeong-cheol, a poor student and day laborer, whom Margaret meets when the police accuse him of stealing her wallet. Instead, the woman decides to take him under her wing, buying him clothes and offering him money, in a rather obvious, but also quite dubious as to its purposes, seduction. Eventually, the two of them form a relationship that makes them both happy. The notion, however, does not last for long, since Margaret uncovers a very dangerous secret Yeong-cheol was hiding, which brings her two identities to a direct clash.

Han Hyeong-mo directs a film in three parts, each of whom seems to be of a different genre. In that fashion, the film starts as a romance, continues as an espionage thriller with much action, and concludes as a melodrama, although the latter element actually permeates the film. Han's approach to his subject, however, is quite minimalist, since the two protagonists are almost the only ones that appear on screen, and the rest of the cast get very few lines, almost exclusively without revealing their faces. 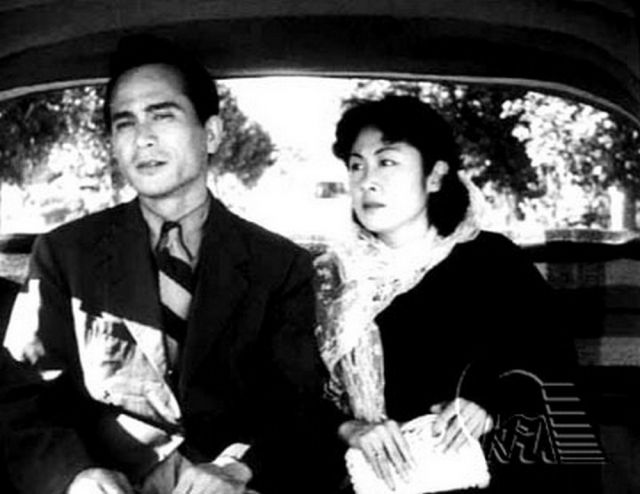 This tactic extends to the production values, with the majority of the images in the film just showing the two protagonists interacting with each other, with the sole exception of the few action scenes, which are the only that take place in a non-urban environment. Lee Seong-hwi's cinematography is quite good in this setting, particularly excelling in the framing of the two characters and the way he avoids revealing the faces of the rest of the characters. Han Hyeong-mo's own editing changes for each part, with the romantic and the melodramatic parts mostly comprising of relatively lengthy one-shots, and the action of many, rapidly changing cuts. Both tactics serve the respective genre's aesthetics quite nicely.

Apart from the above, the film provides an obvious metaphor for the effect of the split of the country, through a number of rather melodramatic dialogues between the two protagonists ("You're so close now, but why have we been so far apart?") and some messages directly addressed to the audience ("Be strong") (source: koreanfilm.org). The kiss of the two also moves in this direction, particularly when one connects it with the true identities of the protagonists. However, Han Hyeong-mo could not avoid submitting himself to propaganda, presenting Jeong-ae as a woman who has come to hate communism, eventually even being vocal about her ideas.

On another social comment, Han Hyeong-mo makes a point of highlighting the modern woman that had emerged at the time, with Jeong-ae being an archetypical character of this concept. In that fashion, Yoon In-ja is exceptional as a woman who knows what she wants and how to achieve it, although she is also presented as morally loose, which, at the time, referred to women who stayed out until late and smoked. Her prowess is equal in both the romantic and the dramatic scenes, with Han building the film around her and her delivering in great fashion. Lee Hyang as Yeong-cheol is also quite good in presenting his two different personas, although his role consists mostly of him interacting to Yoon In-ja's performance.

Despite some evident faults, mostly deriving from the melodramatic part and the production values in the action scenes, "The Hand of Destiny" is a great film, full of meaning, and a great sample of the social circumstances in S. Korea after the Korean War.

"The Hand of Destiny" is directed by Han Hyeong-mo, and features Lee Hyang, Yoon In-ja and Ju Seon-tae.