[Guest Film Review] "Woman is the Future of Man" 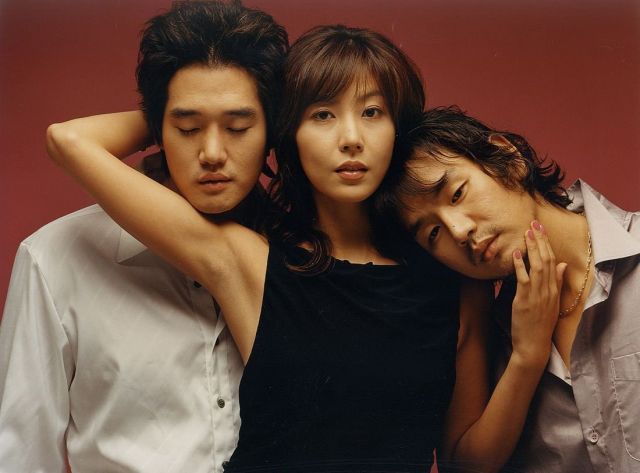 Probably one of Hong Sang-soo's most accessible films, "Woman is the Future of Man" entails most of the elements that have made the director an international sensation.

The film begins in a regular Hong Sang-soo fashion, with two friends ending up getting drunk in a somewhat cheap restaurant. Heon-joon is an aspiring filmmaker who has just gotten back from his studies in the US, and Moon-ho, a part time lecturer at a university. Their drunken conversation (inevitably) brings them back to a woman both dated during the same time in the past. This woman is Seon-hwa, a former painter who now runs a hotel lobby bar in Puchon. The two of them decide to go and meet the woman, and the three of them end up drinking in her apartment.

The main theme of the film is the behaviour of men in contrast to the one of women, with the former being characterized by indecision, with the exact opposite applying to the latter. This main theme presents the male characters in Hong Sang-soo as obnoxious, although one of his biggest traits is that, at the end, he makes them likeable, in the fashion that people who make same and continuous mistakes always find someone to like and take care of them (the "woman-mother syndrome" if you prefer). The fact that they always have troubles with alcohol is the main ingredient in this characterization, with Hong Sang-soo presenting, again once more, scenes where everyone is drunk quite convincingly, even including all stages of the "endeavour" (love, anger, reminiscing, extreme decisions that end up in regret, etc).

Another "trait" of men the film highlights is that they are willing to fall very low to have sex with women, with the two protagonists using their capacities to attract women (the fact that a director does it could be perceived as a comment about the practices in the industry). This element is hilariously portrayed in a parallel where both protagonists ask the waitress in the restaurant to "work" with them, and in a rather extreme fashion, with the interaction between Seon-hwa and a former friend, and the way Hun-joo exploits the tragedy later. 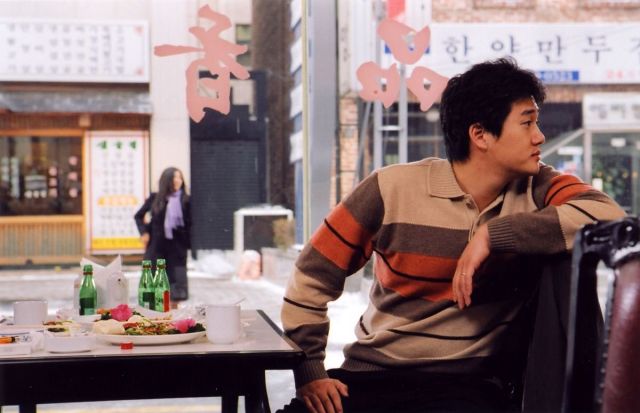 The flashbacks that somewhat confuse the timelines, and subsequently, the narrative are also present, with Ham Seong-weon's editing presenting them in very interesting fashion, that retains this sense of disorientation, but ends up being quite entertaining.. Kim Hyung-koo's cinematography and particularly the framing is quite good, in realistic fashion.

The casting of the film aimed to include two men who are quite different from each other in the way they conduct themselves, but eventually show how similar men are, at least regarding their interactions with women. Kim Tae-woo as Heon-joon and You Ji-tae as Moon-ho embody this tactic greatly, with two performances that focus on realism, without any significant exaltation required. Sung Hyun-ah as Seon-hwa plays the archetypical role of the "apple of discord" with an accuracy deriving from both her acting and her appearance. 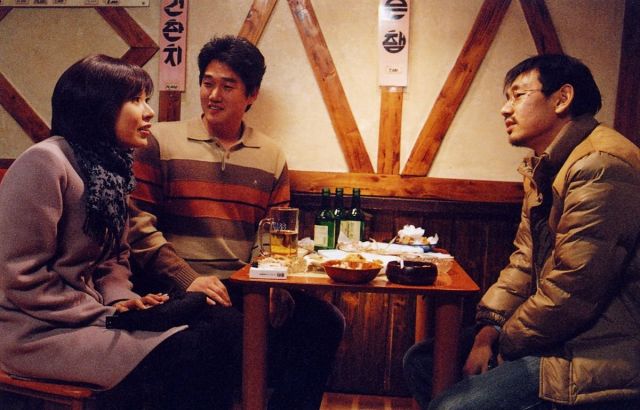 At 87 minutes, and without any extreme "tricks" in the narrative, "Woman is the Future to Man" is one of the easiest films of Hong Sang-soo to watch, and a movie that all fans of art house films will enjoy, even if this is their first experience with Hong Sang-soo.

"Woman is the Future of Man" is directed by Hong Sang-soo and features Yoo Ji-tae, Sung Hyun-ah and Kim Tae-woo.

Available on an Arrow Film Blu-ray from Amazon

Blu-ray US with Tale of Cinema (En Sub)

"[Guest Film Review] "Woman is the Future of Man""
by HanCinema is licensed under a Creative Commons Attribution-Share Alike 3.0 Unported License.