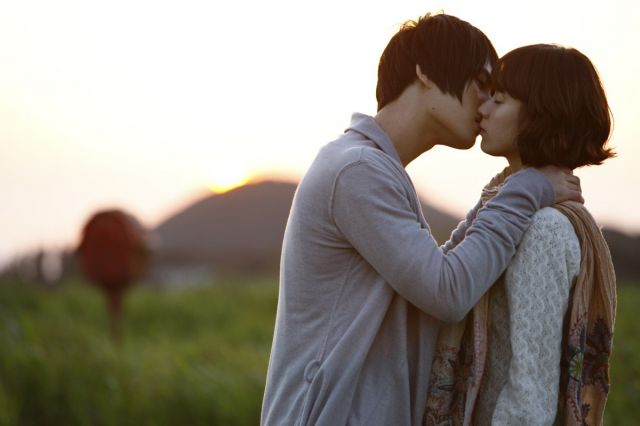 Television movie released on both television and in cinema, "Postman to Heaven" (천국 의 우편 배달부) is a production between South Korea and Japan.

The film tells the story of JaeJoon (Kim Jae-joong), an angel messenger that has the ability to travel between the real world and heaven delivering letters of people to their deceased loved ones. Character in a fairy tale, he is known as "Postman to Heaven" and can only be seen by those who suffer the loss of someone he loved. After meeting HaNa (Han Hyo-joo), a young woman who sent letters to her deceased husband, JaeJoon hires her as an assistant in their missions to fix the misunderstandings left by deceased relatives families. However, things get complicated when JaeJoon and HaNa fall in love... When HaNa begins to forget her late and unfaithful husband she also begins to lose the ability to see JaeJoon.

"Postman to Heaven" is a very beautiful and touching film. With a romance that transcends the natural barriers - between an angel and a human - and being so careful about death and mourning, the South Korean production makes anyone sensitized.

The romance between HaNa and JaeJoon happens slowly and subtly, small actions between the couple show how their feelings for each other will grow over time. Highlight to beautiful garden where developed much of the plot. Serving as a backdrop to the most sweet and romantic scenes between JaeJoon and HaNa, the scenario flowered become a character in the story, such impact.

The film gets a more cheerful and beautiful tone when the angel and the young assume their mutual feelings, but it will soon be dismantled by the drama of HaNa in begins to lose her sight of JaeJoon... One of the most beautiful and sad scenes of the film lies precisely in this moment: when the couple is in a coffee shop, HaNa realizes that sometimes cannot see JaeJoon, the pair leaves the site and in a discussion of the problem, the girl says crying at angel than love him and walks away. Simply lovely the couple conversation about the issue, it is hard not to cry in front of the couple's suffering.

From there, the duo knows it's only a matter of time for they cannot see each other forever... And when a mission fails as Postman from Heaven... JaeJoon disappears. But before, he leave a letter to HaNa, in which he recalled that he had said the day he was caught cheating people - he was using lies to alleviate the suffering of families who had lost their relatives - would be the end. It is worth noting the dramatic moment in HaNa stands before JaeJoon, however, cannot see him because he's invisible... Very moving.

With a romantic and touching final scene, "Postman to Heaven" has a surprising outcome and fulfills its role, Heaven's message about love.