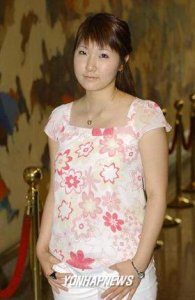 Guiyeoni became an overnight sensation with her internet novellas that were adapted into silver screen features, such as "Temptation of Wolves", "The Guy was Cool", and "Do Re Mi Fa Sol La Si Do". The "Guiyeoni Syndrome" is about to spread once again with her new novel on teen romance, "Searching for an Angel".

This story was also published as a series for cellular phone services. It's about a female high school student, Park Seon-min, who can no longer feel emotions due to a poor relationship with her parents and an even worse one with an ex-boyfriend.

Seon-min's best friend is Lee Ha-young, and she learns that a first generation Korean-Japanese boy named Kang Chan-su has flown in from Japan to meet Ha-young. Chan-su is a former host at a ladies' club in Japan, and he brings along another handsome host, Shou Shinojaki. The story tells the tale of love and curiosity involving the four.

The author not only tells the tale through the young eyes of a teenager, but also weaves in the teens' perspectives about the confusing world of adults. Guiyeoni's writing style has matured with experience.

The young author and Sungkyunkwan University acting student is planning a trip to Africa during her summer break.