Gummy on the Soundtrack for "The Housemaid" (Korean Movie) 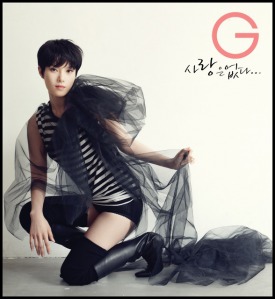 With "The Housemaid - 2010" to be out in the U.S. theaters very soon, here's a look at the Korean singer, Gummy, who participated in the movie's soundtrack album.

And, before we start, here's the music video of the song:

The title of the song is "What Should I Do" (Korean: Uh DDuhk Hae). This song is about a woman repeating "What should I do" over and over after she breaks up with her boyfriend. She is so hurt that she doesn't know how to handle herself. Her album that contains this song is made under the theme "Loveless". She was not aiming to sing this song for the movie, but after it was included in the movie, her fans say that this song matches the movie very well – especially in the music video – as if the song had been written for the movie.

Her real name is Park Ji-yeon (born April 8, 1981) but better known as Gummy, her stage name. She debuted in 2003 with the album "Like Them". She is a part of YG Entertainment which also includes Big Bang, 2NE1, Se7en, and etc.

She is popular for her soulful and powerful unique voice. She has released multiple albums (including drama and movie original soundtrack albums) and music videos since 2003. She has received many awards as well. In 2008, she swept all the top ranks of online music charts.

In 2010, in addition to her mini album "Loveless", she brought out the digital album called "Love Recipe".

Here are some of her top songs:

It is another song in her mini album "Loveless" which was released last year. It may seem like it's a movie soundtrack, but it's just a music video.

This song was released in 2008. With this song, she was ranked in #1 position on online music charts. Popularity soared as TOP of Big Bang featured the song.

"Gummy on the Soundtrack for "The Housemaid" (Korean Movie)"
by HanCinema is licensed under a Creative Commons Attribution-Share Alike 3.0 Unported License.
Based on a work from this source