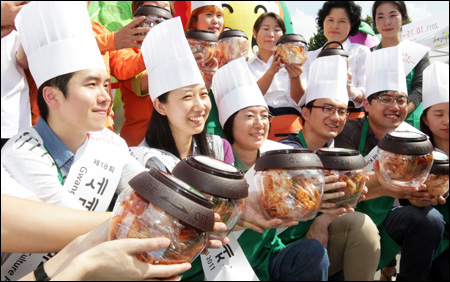 Organizers demonstrate kimchi made during a promotional campaign in Insa-dong, Thursday, for the 18th Gwangju World Kimchi Culture Festival./ Yonhap

The Gwangju World Kimchi Culture Festival is celebrating its 18th year with a unique tour project designed to promote the face of "hansik", or Korean food, to the world.

The "Kimchi Bus Project" will take several promising chefs in their 20s to 50 cities in 34 countries starting in October. They will initiate various promotional projects in countries including Russia, Iran, Turkey, Italy, France, Canada and the U.S., among others. The bus tour will last for 400 days.

The project is the highlight of the five-day festival from Oct. 15 to 19 that has played an important role in enhancing Gwangju's status as the nation's Mecca of kimchi.

"Through this festival, we hope to let the world know that kimchi is becoming a popular cultural trend in various parts of the world", said Kim Seong-hun, head the festival's organizing committee, during a press conference in Insa-dong, Seoul, Thursday.

The former agricultural minister brought his PR team to organize a street campaign in Seoul ahead of the festivities in Gwangju, a three-hour ride from Seoul by the high-speed KTX train. 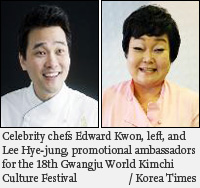 During the festival, visitors can sample a wide range of kimchi, and learn how to make some as well. The programs include the kimchi exhibition, industry fair, cabbage harvesting and conferences on the globalization of kimchi.

The southwestern city has a long tradition of promoting kimchi at home and abroad through various research facilities and projects.

The city is one of the country's largest producers of essential kimchi ingredients, including cabbage, garlic, onions and salt.

A staple of the Korean diet, kimchi is a fermented mixture of cabbage, onion, garlic, red pepper powder and salt. There are many kinds of kimchi, some with distinct regional traits.

Kimchi from the South Jeolla region, including Gwangju, is made with a large amount of spices, so it is relatively spicy and salty. Spices are mixed with glutinous rice paste to make them thick, and so they don't go bad easily and can be stored longer.

The region's kimchi is considered to have a rich flavor, owing to the several types of salted fish used in the mixture of spices.

"Gwangju Kimchi fest to begin Oct. 15"
by HanCinema is licensed under a Creative Commons Attribution-Share Alike 3.0 Unported License.
Based on a work from this source