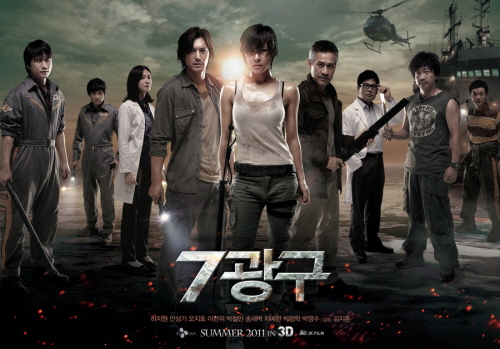 Several block busters are looking forward to war. "7 Sector" is one of the hottest movies in the center of attention.

Actress Ha Ji-won and director JK Youn from "Haeundae" (2009) which recorded 10 million viewers have come together once again.

Ha Ji-won has become a heroine who fights with an unknown creature, displaying more of her special action and looking like the true female warrior. Other casts include Ahn Seong-ki, Oh Ji-ho, Song Sae-byeok and more.

This movie has already been sold to 46 different countries in the film market in Cannes which was held in May. The movie has the intense story of the crew on a drill ship fighting with an unknown creature. It is an unfamiliar monster movie as well as the first Korean 3D blockbuster.

While we see if the movie will bring back the glory of 10 million audiences, if it does, director JK Youn can be called the hand of Midas in commercial movies. Ha Ji-won will also gain the honor of being the actress in two movies that drew in 20 million audiences.

"Ha Ji-won and JK Youn reruns 10-million myth?"
by HanCinema is licensed under a Creative Commons Attribution-Share Alike 3.0 Unported License.
Based on a work from this source