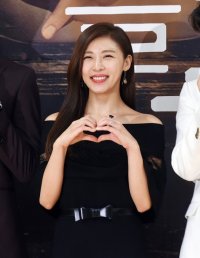 In the midst of sighs that there are no more females in leading roles, Ha Ji-won will challenge this.

Ha Ji-won will start filming "Seven Remedies" in New Zealand in June and will be coming back from a one-year hiatus.

After "Miracle on 1st Street" last February, she only appeared in cameos in "Last Present - 2007" and "Sex Is Zero 2". Now, she will be spending the summer with "Seven Remedies".

"Seven Remedies" is about a monster that is transformed through viruses and a female character who tries to fight it.

It's drawing more attention because there are few movies with female lead roles, and those few fail to succeed. Most movies have male leads, but this one has put a female in the lead.

A representative of the production company said, "Ha Ji-won will be showing action like Angelina Jolie in 'Tomb Raider". Her fighting scene with the monster will be the highlight". He said that she received the lead role because of confidence in her.

After the filming of "Seven Remedies", she will be busy filming Director JK Youn's 15 billion won (US$ 15 million) project "Haeundae" early next year.

"Ha Ji-won comes back with 8 billion won (US$ 8 million) project"
by HanCinema is licensed under a Creative Commons Attribution-Share Alike 3.0 Unported License.
Based on a work from this source