From left, actors Jang Hyuk, Park Hee-soon and Ha Jung-woo appear at a promotional event for the film "The Client" in Seoul, Tuesday. / Yonhap

Local cinema has seen a host of dramas set in court, but actor Ha Jung-woo and the other makers of "The Client" are confident that their film offers something new as the country's first legal thriller.

The upcoming film is expected to tell a Korean-style story that stands apart from its American counterparts.

"When I was at Cannes, many people told me that Korean cinema is really in the now. They say that Korean movies have meaningful stories and deliver emotion, thrills and humor in a very unique way", Ha, who portrays a lawyer in the film, told The Korea Times in an interview following a promotional event for the film, Tuesday, in Seoul.

"Our movie speaks to the audience in the old-fashioned way, through the power of drama. So instead of trying to mimic the latest American legal TV dramas, we looked to classic Hollywood movies for inspiration", said Park Hee-soon, who plays a prosecutor, about watching older American films such as 1957's "Witness for the Prosecution".

Jang Hyuk, who appears as the plaintiff, added that he was confident about local films having a distinctive color.

In addition to being a genre-defining project, the film has already made headlines for bringing together the three A-list actors.
In the film, a young man (Jang) is accused of murdering his wife. To complicate matters, the woman's body has also disappeared. Ha appears as a lawyer who must defend his client before the jury, opposite a powerful public prosecutor (Park). It is the first time a jury system is being portrayed onscreen. 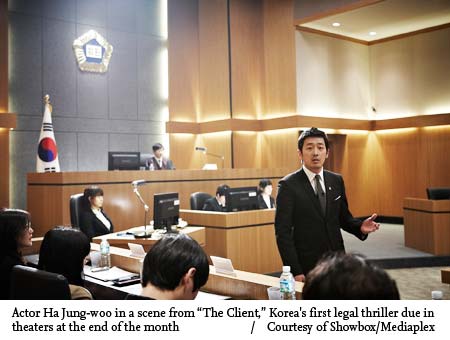 Newcomer director Sohn Young-sung helms the project. Given the nature of legal thrillers, which are basically about whether a plaintiff is guilty or not, "The Client" is bound to contain certain conventional elements such as surprise twists and turns, the director told reporters.

He said he had to fulfill both those new to the genre as well as its biggest fans, and thus focused on creating lively characters. Sohn repeatedly emphasized how fortunate he was to work with some of the country's top actors, especially praising Ha for his "moments of true brilliance and genius" during the production.

The star of critically acclaimed films such as "The Murderer" (aka "The Yellow Sea") said the project evoked his early days of theater.
"In designing my acting style I recalled my experience in theater during my 20s. Instead of going with the flow of the production, I had to calculate everything in advance and really paid heed to diction and tone, and accurately delivering my lines", said Ha.

"The court scenes in particular involved a 360-degree scope in terms of acting, as if I were onstage. There was the judge in front, the jury and witness to the side, and the audience to the back. So after shooting came to an end my co-stars and I stayed behind to rehearse".

The actor said he was inspired by the professionalism his co-star Park exhibited during those practice sessions. Jang said he was also impressed by the natural gestures Park employed in his acting.

Park, who breaks away from his tough roles as a gangster ("The Scam") or police officer ("Seven Days") by playing an elite character, said the long takes in the court sequences proved to be a new challenge. "I'd sit down after delivering my line and prepare for my next line, just as a real prosecutor would, so it helped me stay in character", he said.

Meanwhile Jang, who had recently been seen in action-packed stories, said the film satisfied his wish to play a more emotionally complex persona.

"Quite ironically I was able to express more by doing less", Jang said, adding that he was inspired by classic films such as Akira Kurosawa's "Rashomon".

In film clips shown during the event, the actor mostly appeared taciturn with enigmatic facial expressions. "I had to appear as someone who can appear at times like a criminal or at other times like an innocent man. I had to find the right balance".

Sohn, a former assistant director to the esteemed minimal realist Hong Sang-soo, said he wished to make the film as realistic as possible and opted for long takes, crafted a speedy narrative flow and refrained from overly stylizing the sets.

"The court set that appears in the film is used in the upcoming local film "Silenced", but we shot our film there first. We look forward to competing in good faith with other such unique Korean films that are due around the same time", said Park.

"The Client", a Showbox/Mediaplex release, is due in theaters Sept. 28.

"Ha Jung-woo confident about Korean-style legal thriller"
by HanCinema is licensed under a Creative Commons Attribution-Share Alike 3.0 Unported License.
Based on a work from this source