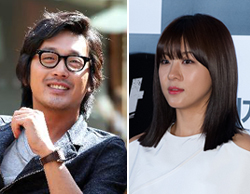 Ha Jung-woo and Ha Ji-won have been voted the most popular actor and actress in Korea in an email poll by the Chosun Ilbo and the nation's largest film ticketing site MaxMovie.

Since the poll targeted online users of MaxMovie who had been to the cinema at least once last year, it probably reflects moviegoers' preferences more accurately than other surveys.

Comparison with a similar survey in April last year reveals that people prefer actors with both acting skills and popular appeal. Ha Jung-woo soared from eighth place in the popularity list in 2011 to the top this year after he appeared in a series of recent hit movies including "The Client", "Love Fiction", and "Nameless Gangster".

New entrants on the list are Park Hae-il (fourth with 8.7 percent), Kim Yun-seok (sixth with 4 percent), and Choi Min-sik (eighth with 3.6 percent). All the three impressed moviegoers with their acting skills in box office hits such as "Arrow, The Ultimate Weapon", "Punch", or "Nameless Gangster".

In contrast, Won Bin and Gang Dong-won, who ranked first and third respectively last year, fell to fifth and ninth place since they have not appeared in any films released this year. Jang Dong-gun and Lee Byung-hun did not make the list although they took the No. 6 and 10 spots last year.

Nine of the 10 most popular actors were also on the list of the most skilled actors, with the exception of Gang Dong-won in the former and Sol Kyung-gu in the latter.

But among actresses, only six found their names on both of the lists. Moon So-ri (fifth with 6.1 percent), Youn Yuh-jung (sixth with 3.8 percent), Kim Hye-ja (ninth with 2.5 percent) and Kim Yunjin (10th with 2.5 percent) were voted as having good acting skills but not on the popularity list, suggesting that the popularity of actresses has less correlation with their acting skills than their male counterparts.

Among directors, Bong Joon-ho was picked as the best with 19.8 percent. Im Kwon-taek slipped from the top last year to third place with 9.22 percent. Kang Woo-seok and Kang Je-gyu, star directors in the 1990s and the early 2000s, ranked in the top 10 but were outperformed by Bong and Park Chan-wook (second place with 9.68 percent), who are becoming well known overseas.

Kang Je-gyu saw his ranking fall from third in 2011 to sixth (3.84 percent) this year after his film "My Way" tanked. Kang Woo-seok managed to hold on to fourth place but he garnered a mere 5.72 percent, down from last year's 14.1 percent.

This year's top 10 list has the same names on it as last year's, with the exception of Byeon Yeong-joo (eighth with 3.50 percent), but the order changed. "Once established, directors' recognition appears to last longer than actors", MaxMovie analyzed.

When asked about their favorite ways of watching films, 82.5 percent said going to movie theaters, up from last year's 66.1 percent. Next came downloading movies on the Internet at 8.1 percent, down from 27.7 percent last year. A glut of 3D movies seems to attract people to cinemas.

"Ha Jung-woo, Ha Ji-won Voted Most Popular Movie Stars"
by HanCinema is licensed under a Creative Commons Attribution-Share Alike 3.0 Unported License.
Based on a work from this source