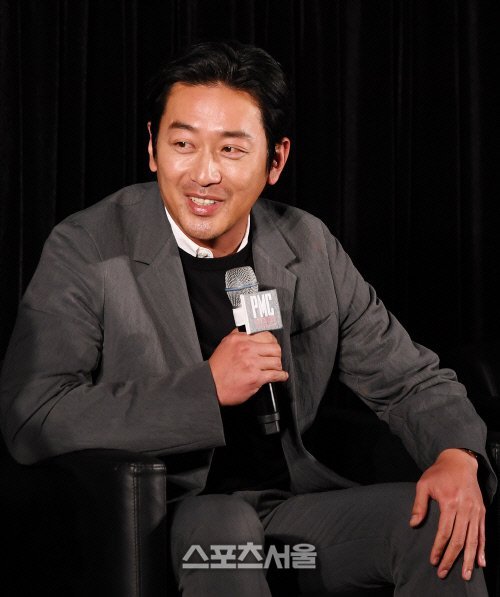 Actor Ha Jung-woo proved his love for his fans by telling them all his plans for his next movie.

Ha Jung-woo met his fans on the 30th of March and talked about his future movie plans and the line-up that was going to be involved.

His next film is of keen interest as it is Ha Jung-woo, a box-office surety that drew 100 million viewers. He's not just an actor, but a filmmaker as well so the release of many of the next lineups, not just one, has attracted public attention as well as industry insiders.

Ha Jung-woo announced his reunion with director Yoon Jong-bin from "Nameless Gangster". He claims he'll be working on a Netflix drama with him.

He mentioned his co-stars of "Boston 1947", director Kang Je-gyu's latest movie about a marathon runner led by the legendary coach Son Ki-jung played by Ha Jung-woo himself. Additional casts to the film are Im Si-wan and Bae Sung-woo.

Ha Jung-woo is working on the film "Ashfall" with Lee Byung-hun, Suzy, and Ma Dong-seok until July, and "The Closet" with Kim Nam-gil has confirmed the third week of August for its release. "Kidnapped", a film by Kim Seong-hun cranks in next year in 2020 and he'll be working with Ju Ji-hoon again.

Ha Jung-woo is a multi-tasker from actor to producer and artist and his has more plans for more work in the upcoming future. The scenario for a piece he was going to direct is complete but scheduling has resulted in someone else directing the film and actor Lee Sun-kyun is in his radar for casting.

There are many variables for a film to reach its release date and Ha Jung-woo's statements may not all be 100% accurate. However, it is an interesting fact that Ha Jung-woo, the leading actor of Chungmuro, just announced his year's plans as if making a brand announcement for his fans.

"Ha Jung-woo Reveals Impressive Line-up for New Movies"
by HanCinema is licensed under a Creative Commons Attribution-Share Alike 3.0 Unported License.
Based on a work from this source