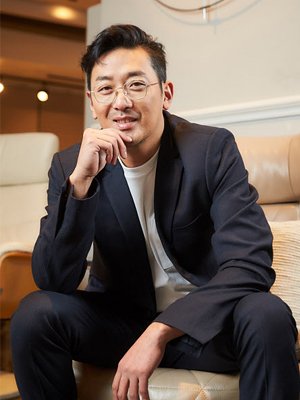 Ha Jung-woo will compete with himself at the year-end box office as he stars in two films set for release this month.

At least 20 million moviegoers are expected to flock to theaters during the year-end season.

In "Along With the Gods: The Two Worlds", based on a popular webtoon, Ha plays the grim reaper who escorts the dead to the afterlife.

"Shooting didn't overlap as I started "1987: When the Day Comes" in April after filming 'Along with the Gods' for a year from May last year, but I had no time off", he said. "I didn't expect the two films to be released at the same time".

The two films are very different, "As a fantasy film needs a lot of computer graphics, I had to talk without backgrounds, so I felt like I was talking to a wall", he says.

As for "1987: When the Day Comes", he was cautious when he visited theaters to meet viewers. "The families of the victims and civic groups came to see the movie. I couldn't say, 'Enjoy the film.' I just bowed to them without saying anything", he recalls.

But the two films do have something in common. "I acted, imagining the world of the afterlife, and I came to look back on my life and wonder if I committed any sins. While shooting "1987: When the Day Comes", I thought of what it might have been like living in Korea 30 years ago, and was grateful for the freedom and democracy that I can enjoy now", he says.

Ha starts his next project next month. "I meet people, paint and travel when I have a spare time during filming", he adds. "Spending time on myself always feels good since I'm still single".

"Ha Jung-woo to Compete with Himself at Year-End Box Office"
by HanCinema is licensed under a Creative Commons Attribution-Share Alike 3.0 Unported License.
Based on a work from this source