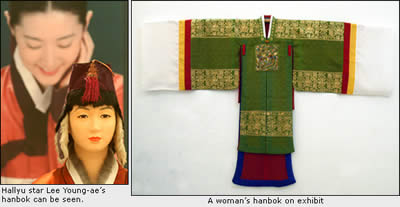 Lee Joon-ik, the director of "The King and the Clown", now Korea's most popular film, said in an interview that the popularity of historical dramas attests to people's increasing interest in Korean traditional culture. A number of movies and television dramas that deal with historical subjects these days, including such creations as the TV drama "Kung (Palace)" ("Princess Hours") and the movie "Forbidden Quest", seem to back up his theory.

The quality of the more recent features has been a great improvement over earlier historical works as they feature a visually attractive range of hanbok, traditional Korean clothes, in both classical and improvised modes.

With their straight and curved lines, the style of hanbok represents one of the most visible aspects of Korean culture. Women wear "chogori", or a blouse-like short upper garment with long sleeves, and a long, wide skirt. While men wear simple pants and a longer chogori, often with a colorful vest and "magoja", or a short coat worn over a jacket. White is the basic color for hanbok, but the materials, colors and way in which the clothes are worn depend on the season.

The hanbok originates back to the Three Kingdoms Period (57 B.C.~A.D. 668) as wall paintings in tombs from the period show. At that time, the type of hanbok worn reflected one's social class.

The exhibition "Hallyu, Wearing Hanbok" which is being held through April 25 at the Seoul Museum of Art's branch museum in Kyonghui Palace, central Seoul, is well timed. The exhibition features 80 traditional and modern versions of hanbok as well as Korean traditional ornaments of different styles, offering the audience a chance to experience their unique charm.

What first welcomes you, after you pass the cherry blossoms, as you enter the exhibition hall is a star zone featuring Lee Young-ae, a star of the TV drama "Jewel in the Palace" who is mostly known for her oriental beauty. Two pieces of hanbok that Lee wore at prestigious international film festivals and international events are on display along with 20 photographs of her wearing hanbok with beautiful natural landscapes of Korea, including Mt. Kumgang. The photographs were taken by renowned photographer Cho Sei-hyun.

"This exhibition offers a good chance to view various kinds of modernized hanbok, which are modified to suit current trends and lifestyles", said Kim Young-sok, a hanbok designer. "The beauty of hanbok is found not only in its humanized design and color but also in the movements of the wearer".

In the drama and movie zones, various styles of hanbok worn by stars in movies and TV dramas, including "TheKing and the Clown", "Forbidden Quest", "Untold Scandal", "Jewel in the Palace", and "Kung (Palace)" ("Princess Hours") are on show. They are displayed in settings recreated from the corresponding movies or dramas in which they are featured, giving the audience a glimpse into Korea's traditional way of life. A traditional kitchen from the mega-hit drama "Jewel in the Palace" ("Dae Jang Geum") and royal bedrooms from "The King and the Clown" and "Kung (Palace)" ("Princess Hours") are shown. In the recreated set of the movie "Forbidden Quest", LCD monitors showing highlights of the movie have been attached to the chests of dummies wearing hanbok, in the form of installation artworks.

The most popular zone is where visitors can try on hanbok themselves. There are 10 hanbok pieces that were used in dramas and movies that one can choose from and try on. One can even pose for photographs against various sets from the movies.

Unlike other exhibitions, visitors are free to take photographs anywhere in the hall.