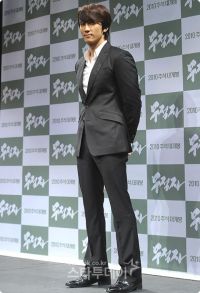 Song Seung-heon, one of the hottest stars of the Korean wave sweeping Asia, is becoming aware of Korean fans' feelings about his conscription records.

The TV and movie actor learned the lesson again last weekend when his public relations company had to cancel an exhibition featuring photos and items related to his military service, which was originally scheduled to run until today.

Mnet Media planned the exhibition at N Seoul Tower near Mt. Namsan that would have displayed Song's military uniforms, ammunition belt and other equipment as well as pictures and films featuring his life in the military. The company officials said that it was to show the star's "other side" to his international fans, who came mostly from Japan to Seoul to meet and celebrate his discharge. The fan meetings were held as scheduled at Olympic Park Stadium on Saturday and Sunday.

Song was forced to serve in the military after a major draft-dodging scandal involving him and other two actors broke out in late 2004. The actors forged medical records as if they were having kidney problems to dodge the mandatory draft. But in a second medical check-up conducted after the scandal, two of them, including Song, were ordered to serve in the military. The record found that there were no kidney problems, just a little high blood pressure.

"I personally regret it, and also for my fans, that (the exhibition) went against my intention", Song said at a press conference Saturday, apologizing for any offense given. "I don't think I'm forgiven for my immature behavior around the time of entering the military service only because I've served in the military for two years. I think it will be important to show a sincere attitude upon returning to the society".

The 30-year-old, who started out as a model, began acting in 1996. With his film debut "Calla" and roles in Korean dramas like "Autumn in my Heart' (2000) and "Summer Scent" (2003), he rose to stardom with a sizeable fan base in Southeast Asia and Japan as well as in Korea.

But in South Korea, where all healthy men have to serve mandatory military service for about two years at around age 20, any public figure's uncovered efforts to dodge the "sacred duty" can inflame public sentiment, often ending their public career for good.

The public regards it highly immoral for the rich and powerful to try to evade the common duty as they often do, breaching equality among citizens.

Government ministers fail to pass parliamentary hearings if their sons are exempted from the military service for questionable reasons. Yoo Seung-joon, once a popular singer, has been rejected for public entertainment in South Korea after he allegedly gave up his Korean citizenship to avoid the military draft in 2002. The strong measures were possible because of the public's feelings against him.

"Hallyu Star Blunders On Military Issue"
by HanCinema is licensed under a Creative Commons Attribution-Share Alike 3.0 Unported License.
Based on a work from this source