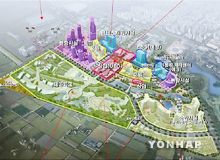 A project to build a large-scale Korean pop culture entertainment facility in the Seoul suburb area of Ilsan is in full swing.

The Hallyu World project pursued by Gyeonggi Province will cost a total of six trillion won, or five-point-three billion U.S. dollars, in public and private investment.

Divided into three sections, Hallyu World is set for completion in 2014.

Builders say the basic groundwork for the site will be finished this year.

Over 100 billion won will go into the project's infrastructure alone, including waterworks and electricity. Fifty-six percent of the construction has been completed thus far.

The Daemyung Group will also begin building a 660-room hotel on the site in June.