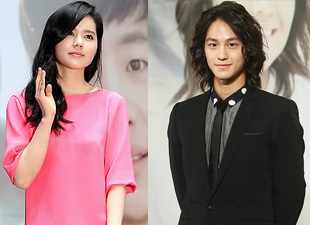 The appointment ceremony, titled "Envoy", was held on April 9th at the UNICEF office building in Seoul. Here in addition to the two entertainers, Kim Dong-eun was also appointed vice-chariman of the organization.

UNICEF is under the United Nations, as an organization that aims to provide aid for children regardless of their nationality, ethnicity, religion, etc.

Han and Kim took part in a promotional video for the Korean branch of the organization, and will continue to serve their roles in any way they can to raise awareness.

In the past, actors Ahn Sung-ki and Kim Rae-won also had served as ambassadors.

"Han Ga-in and Kim Beom Appointed Special Ambassadors For UNICEF Korea "
by HanCinema is licensed under a Creative Commons Attribution-Share Alike 3.0 Unported License.
Based on a work from this source