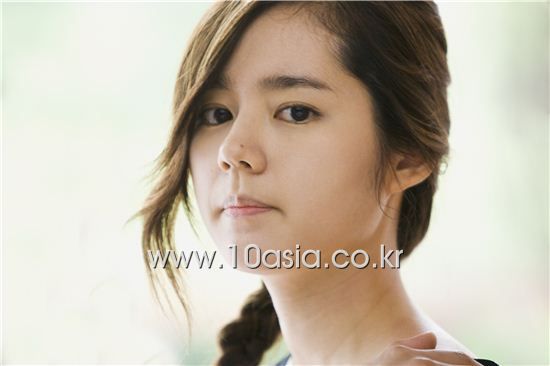 The phrase 'ideal woman' pops into mind before 'actress'. Han Ga-in has always been every man's ideal woman -- from when she appeared on the news by chance in high school as a top student in her class dreaming to major in medicine to when she was the Olivia Hussey-resembling high school girl in plaited pigtails (in film "Once Upon A Time In Highschool") to when she was crowned 'queen of tears' playing her character who agonizes over her past from the days she was single (in KBS TV series "Terms of Endearment"). Her facial features and bright eyes which stand out even without any fancy make-up, placed her on the list of bywords for beautiful women since the beginning stages of her career.

So even though she chilled the hearts of many males, from high school students to reserve officers to single men, when at the age of 23 she announced her marriage to fellow actor Yeon Jung-hoon in 2005, her appearance is probably not the only reason she remains the ideal woman for many men five years later. She is closer to being the affable girlfriend than a coquettish lady as seen from her portrayal of the assertive and shrewd character she played in MBC drama "Super Rookie". And like she described of her three-year hiatus -- " I spend very ordinary days when not acting, just doing household chores. And it turned out that I was so busy that I didn't feel time pass by", -- Han too turns out not to be a 'goddess' or 'heartthrob', but rather no different from any other female in her late twenties. What is rather more impressive is her polite manners and slightly more honest personality which she may have been born with or could come from her relatively quick career start.

But nobody says that even this model student who rehearses her Japanese lines to the extent that "they will come out seemingly automatically with the slightest prod" by failing to let go of her recorder day and night when on shoots overseas, cannot have unexpected desires. In SBS show "Bad Man", the actress "rid herself of the image which is as pretty and clean as a crystal", as said by director Lee Hyeong-min, and took on the role of Moon Jae-in who is an ambitious consultant who dreams of making her way into a rich household. Just the fact that she, who was always the symbol of purity in cosmetics or home appliance commercials, transformed into someone who represents worldly desires was interesting. And the fact that she recommended music which one can listen to while thinking of their first love from a long time ago or the love they have broken up with, was also interesting. "I tried using the subtitle 'To you who is probably listening to this song somewhere'...... I'm sure everyone has someone in their memories who fits the phrase".

1. Hwayobi 3rd Album "Because I Love You"
In the fall of 1996, "How's It Going", which completely overtook streets and the song request lists of radio shows, made unknown college student Lee Jung-bong the best ballad singer of the time. The composed yet sad lyrics in the form of a letter to the lover one has broken up with and the lyrical melody continues to be loved as a classic even today, 15 years after its release. Since a song also contains the sentiment of the time during which it is released, it is rare for a remake to do better than the original but the version Hwayobi recorded and listed in her third album in 2002 also contains vocals with an enchanting amount of depth. "It's a song I often listen to when I go on late-night drives alone but it gets sadder the more I savor each phrase of the lyrics. I like the original song by Lee Jung-bong as well but I think the song Hwayobi sang touches me more because we're both females".

2. Sung Si-kyung 5th Album "The Ballads"
"I enjoy listening to all of Sung Si-kyung's songs because I really like his voice itself but 'On the Street' in particular is a song where the lyrical lyrics, melody, and his sweet vocals harmonize very well. I think I'd be able to empathize strongly with the song even if I were listening to it in the middle of a bustling Myungdong". Like Han Ga-in says, Sung Si-kyung is a singer whose voice is his best instrument. In the music industry in the 21st century where it has become difficult for male solos, even more so ballad singers to survive, he has pursued his activities for close to 10 years without losing his color and is also a musician who holds star quality. That is why it is only natural that listeners await the music comeback of this man who joined the military in 2008 and was discharged this May.

3. Nell 4th Album "Separation Anxiety"
Nell, formed in 1999 of vocalist Kim Jong-wan, guitarist Lee Jae-kyung, bassist Lee Jung-hoon and drummer Jung Jae-won, released their first album "Reflection Of" in 2001. They became more popular with the public when two songs from their fourth album from 2008 "Separation Anxiety" became huge hits but their previous works such as "Stay" have constantly been loved for their addictive and dreamy sound. "I like most of Nell's songs because of their unique vocals and sentimental melodies. There's a charm about them that you can't seem to let go of even though they seem quite depressing. I cherish 'Drifting Apart' from the album but I would also like to recommend 'Fisheye Lens' and '12 Seconds'."

4. Leeds 1st Album "Obsession"
In the fall of 2002, female solo singer Leed's debut song became popular without the use of any particular marketing tactic but by word of mouth. It was the result of her rich yet sorrowful vocals which had been trained during her time as a voice major at the University of Calgary after immigrating to Canada with her parents during her teenage years, and the producing of songwriter MGR of numerous hits. "It was a song I liked from the moment I first heard it...... I think the lyrics did very well in expressing the emotions of a person who is alone after a breakup".

5. Kim Hyun-sik 6th Album "KIM HYUN SIK VOL. 6"
The late Kim Hyun-sik was both an outstanding vocalist and songwriter as well as a lyricist who writes unforgettable lyrics using the most ordinary words. It has been some 20 years since his sixth album, containing numerous masterpieces, has been released but the emotions felt by lovers of his music continues to live on. "I tend to savour sad emotions that I feel from sad songs but 'Making Memories' is a song that I put on repetition while on shoot. I just couldn't find myself stopping because his seemingly composed style of singing, his voice which has depth and the lyrics completely shook me up".

"Han Ga-in's Song Picks"
by HanCinema is licensed under a Creative Commons Attribution-Share Alike 3.0 Unported License.
Based on a work from this source