Han Hyo-joo: 'My Best Decision Ever Is Becoming Actress' 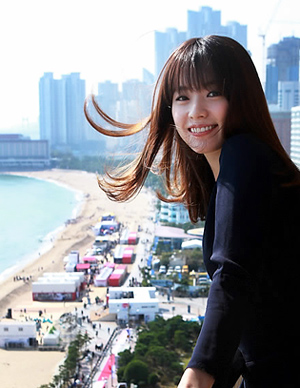 Actress Han Hyo-joo, who played the female protagonist named Jeong Haw in the opening movie of the 2011 Busan International Film Festival, "Always", said, "That I decided to become an actress has been the best decision ever of my entire life. I greatly enjoy acting".

Han came to a hotel in Busan for an interview on October 7. She said, "Pretending to be a blind person was very difficult, and my senses of touch and vision have become very sensitive". The movie is about the love story between a man who was once a boxer and a woman who gradually loses her eyesight. Jeong Hwa is a tragic character who lost her parents and eyesight due to an accident. And she has endured many difficulties including her boss's sexual harrassment, putting on a brave face and making a living for herself. Han Hyo-joo said, "I felt frustrated while playing Jeong Hwa. She has deep scars, but I could not understand why she always had a smile. So it was difficult to express her emotions. At that time, I came to meet an actress who lost her eyesight. She was living her life very pleasantly, and her appearance made me feel ashamed. She might have had sadness inside her, but she never showed any of her sorrow. I learned many things from her". 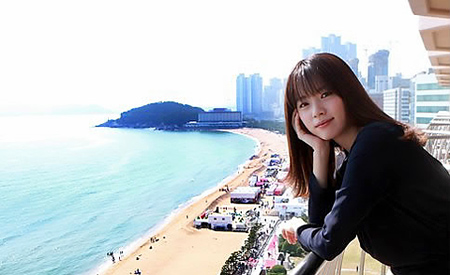 She appeared with the star actor So Ji Seob for the first time. She said about him, "Before I met him, he was just one of 'actors', but I have come to know that he is very kind while working together. In addition, his acting was amazing. He seemed to present natural acting rather than taking care of any technical acting. If we filmed the same scene five times, he showed all different emotions every time. I cannot act like that".

She has appeared in dramas rather than movies so far. She gradually acquired more fans with her appearances in hit dramas such as "Brilliant Legacy" and "Dong Yi", but she also steadily appeared in movies. She debuted with her appearance in the movie entitled "My Boss, My Teacher" in 2005, and she appeared as the protagonist for the first time in the movie "Ad-Lib Night" in 2006. Her acting in a low-budget movie "Ride Away" (2008) was well received by critics. She appeared in a telecinema entitled "Heaven's Postman" with Kim Kim Jae-joong Jae Joong in 2009, and finally she was cast as the female protagonist of the commercial movie "Always". She said, "I appeared in a movie after such a long break and the atmosphere of filming a movie was unfamiliar to me, so I had difficulties in the beginning. I tried to comfort myself, but I still felt pressure. It was okay to have a long preparation period, but it was difficult to wait until I was ready. There were many scenes in which I had to express emotions such as crying, so those scenes that I had to continue to maintain those emotions even after having a little break between each scene were very difficult".

Han Hyo-joo has shown various appearances in dramas and the movies, and she personally thinks that her best decision during her life of twenty five years was that she became an actress. She said, "Acting itself is very pleasant, and I could have a better life thanks to this job. If I were not an actress, how could I show kindness to others at this age? I always treat others to eat (laugh)". In the middle of her twenties, she has expanded her acting area from independent films to commercial films. But she said, "My acting ability has been overestimated so far, and I think that I could receive favorable responses thanks to good dramas". Asked about her role model, she answered, "I do not have any particular role model, but I like the acting of Natalie Portman in her movie 'Black Swan' and the acting of Marion Cotillard in 'La Vie en Rose'. I watched Marion Cotillard's movie many times and felt something while watching it when I was in a slump". 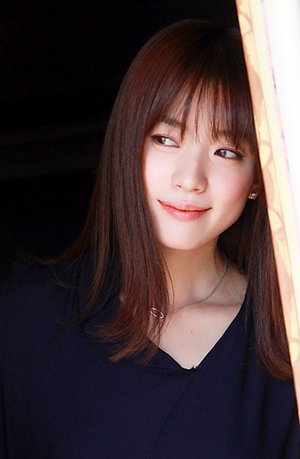 She also revealed that she did not want to be locked by other people's evaluation about her, such as her image created by people. She said that she could film any provocative scene if necessary even though she has the image of a pure and innocent person. In addition, she said, "I do not want to focus on any particular genre. There is no way to say, 'I will only appear in a certain kind of movie'. If possible, I want to appear both in movies and dramas. While filming a drama, I can receive lots of feedback from people and I can completely be immersed in the work while filming it day and night. In case of filming a movie, it is different because I have to perfectly prepare in advance to show a perfect appearance. Now I want to film another movie and then I want to appear in a drama again".

"Han Hyo-joo: 'My Best Decision Ever Is Becoming Actress'"
by HanCinema is licensed under a Creative Commons Attribution-Share Alike 3.0 Unported License.
Based on a work from this source