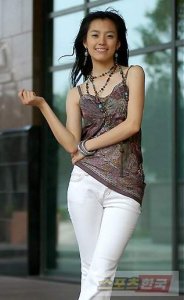 The MBC drama "Dong Yi" is the first historical drama for Han Hyo-joo. The show is the latest work by director Lee Byeong-hoon, who has established his name in the genre by directing a series of hits such as "Heo Jun", "Jewel in the Palace" ("Dae Jang Geum") and "Yi San".

"At the beginning, I was determined to leave everything up to director Lee Byeong-hoon, rather than doing anything on my own. But now, I want to make my own character of Dong Yi, rather than dreaming of becoming the second Daejanggeum", the lead character of mega hit "Jewel in the Palace" played by Lee Young-ae, said the 23-year-old actress.

Viewers who remember "Jewel in the Palace" ("Dae Jang Geum") are likely to search for similarities as both focus on the life of women who worked their way to the top. "It would be a lie if I say I don't feel any pressure from being compared to the last great work", Han said. "I will have to do well, and I'm sure I'll be able to. I had special lessons from the director for two hours a day until very recently".

Han debuted in sitcom "Nonstop 5" in 2005. Last year, "Shining Inheritance", which was immensely popular with over 40 percent ratings, was her real breakthrough. "I was just doing my job, but people loved it", she says. She has an angelic and fragile image that can make her difficult to remember. "I go anywhere without makeup, and nobody recognizes me. But I think my inconspicuous face makes me versatile and enables me naturally to adapt to any given situation. I don't necessarily want to force an image change", she says.

"Dong Yi" has been airing on Mondays and Tuesdays since March 22.