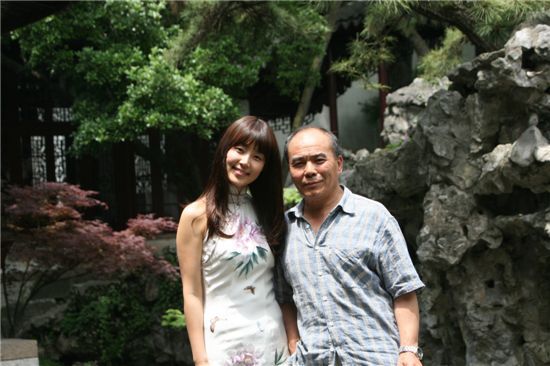 The actress, who plays the female lead in the 26-episode drama, shared her sentiments after wrapping up three months of on location shoot through a press release distributed Tuesday.

"There were some language barriers but it was a precious time that made me realize we can communicate with our eyes and acting", the actress was quoted as saying. "Shooting this drama was very significant because I learned and felt a lot not only as an actress but as a human being".

She explained that although she had "worries" about working in unfamiliar settings and in a foreign country, she went to work believing that it was "a new challenge" that she had to take on because she still has "much to fill in as an actor".

Han also thanked the actors and staff members on the show as well as director Huang, who "treated a foreign actress like family".

Set in the city of Suzhou, dubbed "Venice of the East", the drama is about the dreams and passions of embroiderers surrounding a legendary artwork called "Heavenly Embroidery".

Han plays the role of Chun Chae-hee, a young Korean woman who came to China to find her mother and becomes a genius embroiderer with her hard work and innate talent for the art form.

She will be attending the "Shanghai TV Festival 2010", to be held June 8 to 10, as part of promoting "Embroidery".

"Embroidery" is scheduled to air in November through major Chinese broadcaster CCTV.

"Han Ji-hye says shooting Chinese drama "Embroidery" was "precious""
by HanCinema is licensed under a Creative Commons Attribution-Share Alike 3.0 Unported License.
Based on a work from this source