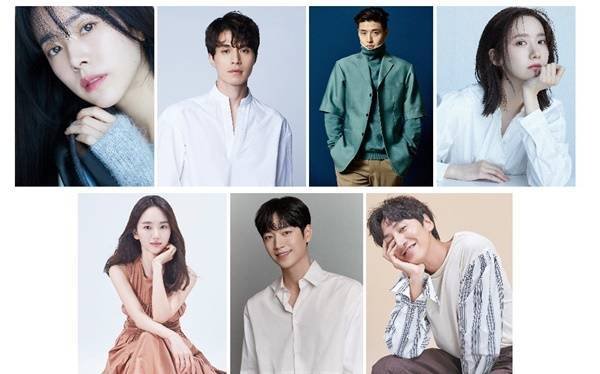 Actress Han Ji-min has confirmed her appearance in the movie "Happy New Year".

Director Kwak Jae-yong's new film "Happy New Year" depicts the story of people who visit Hotel Mross with their own stories creating relationships in their own ways.

Han Ji-min plays the role of a hotel manager on the ball who has been hesitant to confess to her boyfriend for 15 years.

Lee Dong-wook transforms into a young and capable representative of Hotel Mross, who has even number obsessive compulsive disorder, and Kang Ha-neul visits Hotel Mross as a job seeker whose girlfriend leaves him after failing the civil service exam for the fifth year.

Yoona is a hotelier for Hotel Mross, and Won Jin-ah plays a musical actress who works as a hotel room maid.

Seo Kang-joon plays a singer-songwriter and radio DJ who has reached his heyday after a long period of being unknown, and Lee Kwang-soo plays a manager who has to standby his artist who emerges as a star right before his contract expires.

Kim Young-kwang and Ko Sung-hee turn into radio producers and jazz pianists respectively, and work together as high-speed couples who prepare for their wedding right away.

On Saturday afternoon, Lee Jin-wook was cast as a plastic surgeon who appears at the hotel lounge and waits for his true love.

Lee Hye-young-I and Jung Jin-young will respectively be transformed into a doorman and a Korean-American entrepreneur who returns to Korea to attend the wedding of her daughter. Lee Kyu-hyung is a historian who walks in and out of Hotel Mross and looks after the future of his clients, while Jo Joon-young and Won Ji-an appear as a high school swimmer and figure skater caught up in the confession challenge of their friends.

"Happy New Year", which boasts a colorful lineup, will be released as a TVing original with its release.