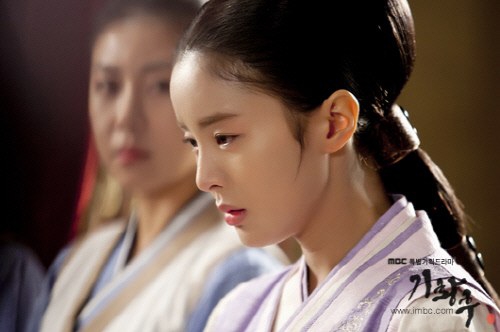 She's taken off the traditional costume of the Yuan Dynasty from the MBC drama "Empress ki" and is putting on a high school uniform.

She's starring in the movie "Mourning Grave" as the leader of her school, Hyeon-ji.

"Mourning Grave" is a movie about a victim of school violence using the powers of another girl to avenge her death.

Han Tae-rin starred in her first short movie called, "Witch Kim Gwang-ja" in 2012 and she says, "I am so happy to be cast for "Mourning Grave". I want to make a good impression here. Forget me from "Empress ki". I might be criticized a lot but I am going to do my best".

"Han Tae-rin stars in movie "Mourning Grave""
by HanCinema is licensed under a Creative Commons Attribution-Share Alike 3.0 Unported License.
Based on a work from this source