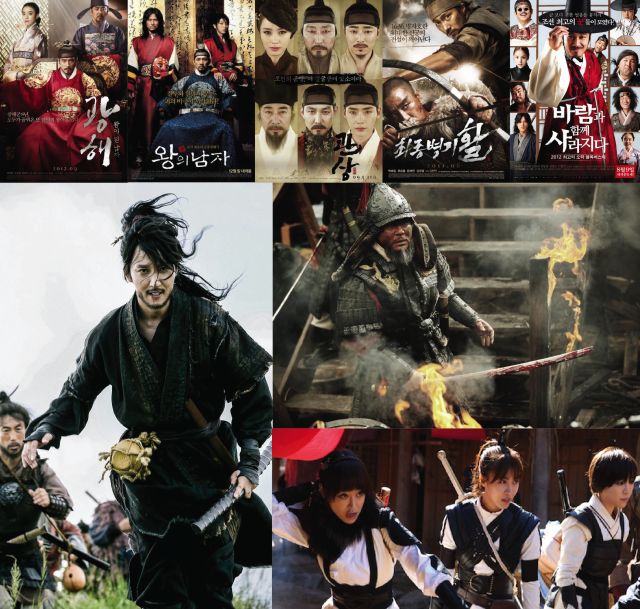 Cinematic journeys back to Joseon and beyond have rewarded the Korean film industry with a string of profitable historical yarns, a trend that has got producers drooling with the prospect of tapping deeper into this regenerative cash cow. Recently, it's been Han Jae-rim's "The Face Reader" (9.1M admissions) that has had locals flustered and, in 2005, it was Lee Joon-ik's "The King and the Clown" that became the first Joseon-era flick to pass the 10 million admissions mark. It's big business with a cultural twist that locals enjoy supporting, international audiences love lapping up, and a trend that 2014 is keen to take advance of as a host of new retrospectives are getting raring to go.

Currently, the king of historical cinema belongs to Choo Chang-min's "Masquerade" (2012) which starred Lee Byung-hun as the pauper come 15th Joseon dynasty royal; the paranoid and cruel King Gwanghae (1574-1641). The film is also the fourth highest grossing Korea film of all-time, and the top period yarn strung to date with over 12.3 million admissions. A month before Choo's film was released it was Kim Joo-ho's "The Grand Heist" (4.9M) that was getting all the attention, and the year before that Kim Han-min's "Arrow, The Ultimate Weapon" (7.4M) was reminding local audiences that old is awesome. The five films mentioned thus far ("Masquerade", "The King and the Clown", "The Face Reader", "Arrow, The Ultimate Weapon", and "The Grand Heist") are the current champions of their genre; the top five Korean period films that have caused producers and filmmakers to scramble to conceive of the next big retrospective they can take to the bank.

So where is this trend heading in 2014? What kind of features are coming our way and, more importantly, are any of them going to be any good? Most of the following films haven't finalised their released dates as of yet (let alone a poster to muse over or teaser to taunt us), but let's take a look and see what 2014 has in store…

Park Je-hyeon's "The Huntresses" is the first flick to hit cinemas and will be released in Korea on 29 of January. The film stars Ha Ji-won, Kang Ye-won, and Son Ga-in as 'three Joseon angels' (as the film was previously known) with skills sharp enough to defend the crown from a powerful group of deviants. These deadly divas were originally bounty hunters and, from what I can find, the team get caught-up in a hunt for some prized artefact. Each of the woman have their own personality, deadly talents and specialities, and together will make for some fun fighting action that historians should best stay clear of. The trailers released so far confirm the "The Huntresses" firmly finds footing in the action-comedy realm, and has the team (alongside actor Ko Chang-seok) taking on masses of men with swords, arrows, some sort of yo-yo, and plenty of kicks and acrobatics as they romp around Joseon taking names (I also like the use of metal scuba suit as protection, a useful tactic some will remember from Kim Jee-won's "The Good, the Bad, the Weird"). It's ancient(ish) antics with plenty of fun and femme-fuelled panache.

Park Heung-sik's "Memories of the Sword" also puts the fairer sex into the action, this time travelling along a more familiar Korean theme: revenge. The film is set sometime during the Goryeo era (918-1392) and opens with a brutal betrayal when, on the verge of a successful uprising, Deok-gi (Lee Byung-hun) turns on his trio of swordsmen. He kills Jon-gul, leaving Seol-rang (Jeon Do-yeon) to flee the scene with a lingering grudge. 18 years later Seol-rang is now, obviously, older, blind, and running a tea house; but she has not forgotten the treachery and manages to train a younger woman (Seol-hee played by Kim Go-eun, who claimed the 'Rising Star Award' at the 12th New York Asian Film Festival for her performance in "A Muse") to master the sword in order to enact revenge against Deok-gi (who is now an extremely powerful military ruler called Yoo-baek). The film has some serious star power behind it, and in addition to Lee Byung-hun, Jeon Do-yeon, and Kim Go-eun, "Memories of the Sword" also calls upon Kim Tae-woo, Lee Junho (2PM member), and Bae Soo-bin to help improve its chances of box office success. There are no images or trailers out yet, but the plot, martial arts genre, revenge theme, and cast make it one of the hottest of the historical bunch. Again, historians need not apply.

Yoon Jong-bin's "KUNDO : Age of the Rampant" runs along the lines of a Joseon-style Robin Hood adventure. It's 1859 and Korea is suffering from natural disasters, a poor harvest season, poverty, hunger, death, and the citizens are suffering as rich nobles continue to exploit them. Dol Moo Chi (Ha Jung-woo), however, has had enough of the corruption and abuse and joins a band of thieves set on levelling the scales in favour of the people. He and Joo Yoon (Gang Dong-won), the son of a nobleman but whose mother was a concubine, ride with the rebel group to steal from rich and give to poor. The two are unlikely teammates given their background, but join team KUNDO believing that their own lives are less important than the needs of others. Director Yoon Jong-bin has directed three others features prior to "KUNDO", the most successful being the 2011 gangster comedy "Nameless Gangster" (4.7 million admission). "KUNDO" also includes the talents of Lee Kyung-young, Ma Dong-seok, Cho Jin-woong, Jung Man-sik, Yoon Ji-hye, and is currently set for release sometime in July.

There are a few other exciting features that we really don't have much information on at this stage in the game. Kang Woo-seok's "Two Cops Zero: Two Constables", starring Sol Kyung-gu, is set during the reign of Seongjong of Joseon (1457-1494) and follows two cops (a veteran and rookie soldier) who put the fear is the noblemen of the time; "Pirates", by Lee Seok-hoon, stars Kim Nam-gil, Son Ye-jin, Yoo Hae-jin, and Lee Kyung-young, and sees two groups of pirates (one led by a male, the other a female) who are after a whale that has swallowed a royal and rare stamp bestowed on Joseon from China; and Lee Jae-gyoo's "The King's Wrath" stars Hyun Bin as the young King Jeongjo (1752-1800) struggling during a highly unstable politically period in the nation's history. (An honourable mention to this list, but one that is not set in the past, is Yim Pil-sung's "Madam Bluff" which takes one of the five classic pansori stories-that of Simcheongga by Manjae Song-and retells it this classic tale in the modern era). But the most exciting period feature scheduled for release this year has to be Kim Han-min's "Battle Of Myeongryang": The story of Korea's, if not the world's, greatest admiral Yi Sun-sin and his divine victory against the Japanese in 1597.

There is a lot of fascinating history behind this iconic Korean military leader and his life, and to have his greatest battle enshrined in celluloid is exciting, really exciting! Kim Han-min (who brought us the visually gripping "Arrow, The Ultimate Weapon") has recruited veteran actor Choi Min-sik to play the great man, and the film focuses on the admiral's legendary victory in the Myeongnyang Strait (near Jindo Island) against the Japanese navy. It was a decisive maritime moment that had significant consequences for not only Korea, but also the whole region as one man, commanding just 13 Panokseons, comprehensively defeated Toyotomi Hideyoshi's 133 Japanese warships (with at least 200 ships supporting his fleet). This film really has the historical fodder to make this one of the most iconic historical films to come out of Korea. This intelligent, loyal, and honourable hero has an epic story behind him that involves political conflict, spies, betrayal, bravery, seeming divine intervention, and with Kim at the helm "Battle Of Myeongryang" is ready to set the Korea summer on fire. I've been doing a lot of research into Admiral Yi Sun-sin, and if you are, like I am, bitten by the history bug you might enjoy this detailed article I came across about the life and times of this great and inspirational leader: "ADMIRAL YI SUN-SHIN, THE TURTLE SHIPS, AND MODERN ASIAN HISTORY"

A sceptic with a Western lens might simplify this year's release as simply "Charlie's Angels" ("The Huntresses"), "Kill Bill" ("Memories of the Sword"), "Robin Hood" ("KUNDO : Age of the Rampant"), "Pirates of the Caribbean" ("Pirates"), "Bad Boys" ("Two Cops Zero: Two Constables"), and "300" ("Battle Of Myeongryang"), and although a few of these may indeed be trying to cash in on the historical hype, there is a lot of exciting acting and directing talent here to make anyone think twice of simply equating most of these films to previous foreign flicks and legends. The fact is that historical features are big business and producers are looking for those quick flips that will attract mass interest. Some of the films here are doing that through star power and creative storytelling, others through historical significance; but time will indeed tell us which of these period yarns will have the thread count to mount a meaningful assault on the current historical champs.

What Korean historical feature are you most looking forward to? Share your excitement with others and me in the comment section below!