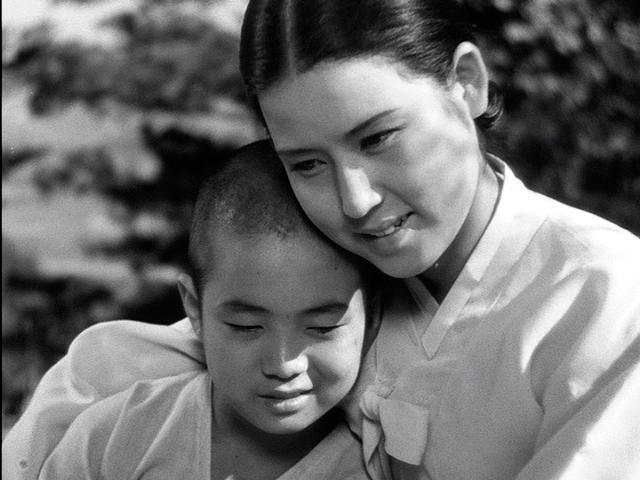 Based on a novel by Ham Se-deok which was already adapted into a successful stage play, "A Hometown in Heart" offers the best production quality of the after-war Korean films that were shot during the 40s (And are featuring in the Korean Film Archive Channel), despite the fact that it was shot with a hand-cranked Parvo camera, equipment that was mostly used during the '20s.

The story revolves around Do-seong, a child monk whose mother has abandoned in a Buddhist monastery and is being raised by the rather strict head monk. Do-seong is sad, not only because he misses his mother, but also because he is jealous of the other children of the area who just play around while he spends most of his days learning chants and doing chores for the monks. His only friend seems to be a handyman that does some work for the temple, who keeps lying to the boy about his mother coming back in order to make him feel better. When Eun-hee, a young widow whose son has recently died, comes to visit the temple, a ray of hope shines in Do-seong's live, as the two of them seem to be more than eager to fill each other's voids, she for a son and he for a mother. At that point, however, his biological mother reappears. 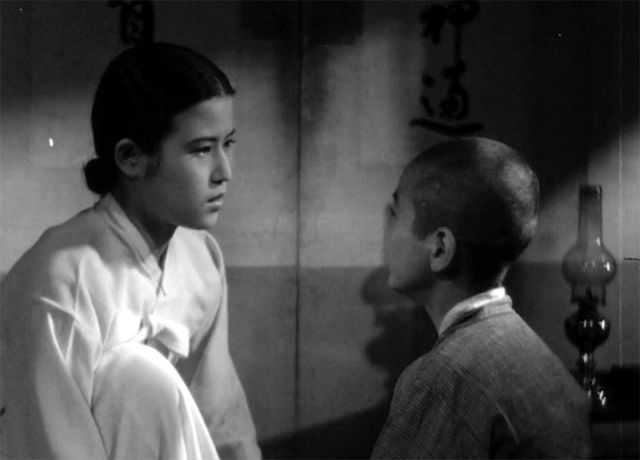 Yun Yong-gyu directs a genuine melodrama, about a boy whose life is in shambles, and every ray of hope seems to clash with his harsh reality, repeatedly. The events may be a bit far-fetched (at least when one watches the film now) but the relationships presented in the film work quite well actually, adding to the entertainment it offers and making a number of social comments, regarding motherhood, family, loss, and tradition versus modernity. The strict head monk's presence functions as the catalyst for the progress of the story, in all the connections Do-seong seems to have: with Eun-hee, his real mother, even the handyman and the rest of the children. At the same time, and particularly through the unexpectedly optimistic finale, the head monk also functions as the driving force for Do-seong's path towards maturity.

This part also made me think that the film could be perceived as a metaphor for S. Korea's future in 1949, when the film was screened. In that regard, if we consider Do-seong as the personification of the then young S. Korea, Eun-hee, with her modern ways and beauty could be a metaphor for the US; the biological mother who abandoned her son, the united Korea of the past; and the monk, tradition and religion, who provided a temporary solace for the troubles the country had to face during and after WW2, but in no way a permanent solution. The finale seems to present the answer the director suggests, although the fact that there is no concise ending, leaves the outcome of this decision quite open.

The acting is on a very high level. Yu Min as Do-seong gives an impressive performance despite his age, highlighting his agony, struggle, and enthusiasm in the best fashion. Byun Ki-jong as the head monk is also quite good as the always strict, but also kind and understanding head monk. Choe Un-bong as the handyman plays his part in a style that reminded me much of Toshiro Mifune, while Choi Eun-hee highlights her transformation as the widow quite convincingly.

Despite the use of such an old camera, Han Hyeong-mo's cinematography is exceptional in its simplicity, highlighting both the rural setting and the characters and the events with artistry and accuracy. The way Do-seong's dreams are depicted is also quite functional, and overall, his work is one of the best assets of the film. Yang Ju-nam's editing induces the film with a fast pace, with the scenario being almost completely stripped from unnecessary scenes, a tactic that definitely adds to the entertainment the movie offers. Yang is also in charge of the sound, which is equally good (with the exception of the sound of the bell) with the various chants that function as the soundtrack of the film working quite well in the narrative.

Even if I am mistaken about the metaphor, "A Hometown in Heart" is an excellent film, and a great forerunner for the Golden Age of S. Korean cinema, that was to come during the '50s.