Since Korean indie cinema seems to struggle to get away from the "rules" set by Hong Sang-soo, it is always reinvigorating to discover productions that take an effort to distance themselves from the particular style. Lee Sang-deok's "Film Adventure" is one of those efforts, which actually succeeds, at least to a point, in a film that won Best Korean Fantastic Film and Fantastic Best Actor at BIFAN.

The story revolves around actor Young-hwa, who has experienced some success but remains unsure about his future, particularly as he struggles to land his next part. He lives in a small apartment with his girlfriend Ah-yun and his cat Theo. The two of them seem to have a great relationship, discussing sincerely about their thoughts, having sex and even dancing occasionally inside the house. However, their life together is not without problems, which eventually come crashing down during a night of drinking with friends, when an insulted Ah-yun comes down hard on her boyfriend for not helping with their bills, and in general being irresponsible. The fight ends up with Young-hwa thrown out in the street in his pajamas, which kickstarts a trip that will have him meet three women acquaintances during the day, one of which is the ghost of a former neighbor. Through his discussions with them, he manages to realize his faults and overcome his crisis.

A number of Hong Sang-soo's trademarks are actually here, with the many dialogues regarding existential issues (although without alcohol) and the surrealistic blurring between fantasy and reality (past and present if you prefer) which has come to become a trademark for the whole scene. However, the element that allows Lee Sang-deok to forge a kind of his own path is the fact that his protagonist acts like a Woody Allen character (Woody Allen himself to be more precise) particularly in the archetype of the "Annie Hall" Alvy Singer. Expectedly, the Korean does not have the quality of humor Allen exhibited (although the sequence with the woman in wheel chair is hilarious), but through a great performance by Cho Hyun-chul, this aspect works quite nicely. 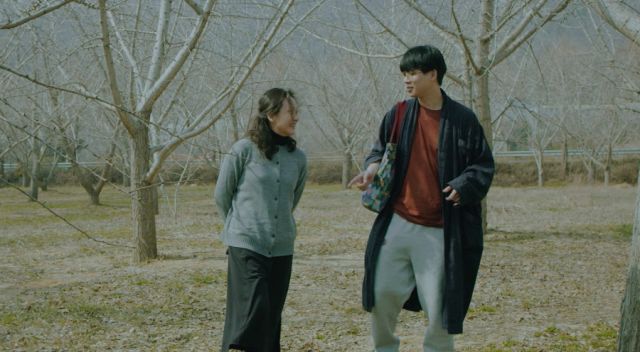 Furthermore, as the various acquaintances stress his "mistakes" as a man, lover and human being, Lee creates a narrative that allows his protagonist to walk towards maturity, and even understand what Ah-yun wants. One could say that these women are instances of his own subconscious, since, in essence, they bring him face to face with his own thoughts. Unfortunately, not all of these discussions are intriguing or even interesting for that matter, in an element that makes the film occasionally tiring.

The presentation of the issues actors face in the (indie) industry is an interesting aspect, particularly through Young-hwa's random meeting with a desperate director shooting a movie, but I feel that this part could have been explored a bit more.

Lastly, the indie road-trip aspect functions just as an excuse for the narrative to unfold, since nothing exceptional or even memorable is shown through Sun Jong-hoon's cinematography, which focuses on realism, in the simplest form possible. On the other hand, Kim Dong-hwan-I's music and the way Lee uses it is one of the best assets of the production, adding much to the entertainment the film offers.

Apart from Cho Hyun-chul, gorgeous Kim A-hyun's performance is also quite good as Ah-hyeon, both in the scenes she seems completely in love with Young-hwa and in the ones where she exhibits her disappointment through neurotic anger.

"Film Adventure" has its share of faults, but in general is a quite interesting effort with a number of elements to like, although almost exclusively addressed to art-house audience.