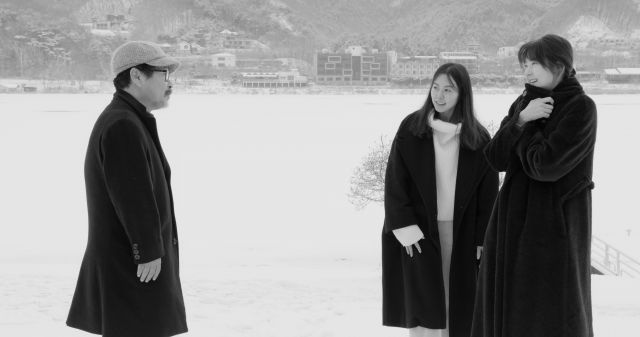 In his latest endeavors, festival-favorite Hong Sang-soo has transferred his virtues to the monochrome world, "taming" at the same time his auteur style, which has become much more approachable. "Hotel by the River" is a testament to the fact.

The film takes place in a hotel by the Han River during the winter, where five persons' lives interact. Yeong-hwan is a famous poet who lives in the said hotel for free, since it belongs to one of his fans. At the time the movie begins, he has summoned his two estranged sons, Kyeong-soo and Byeong-soo, because he believes he is about to die, although there is no reasonable explanation for this opinion of his. The two men do not have the best of relationships with their father, particularly because of his treatment of their mother. Furthermore, they are not on great terms even with each other, since Kyeong-soo has enjoyed some success as an indie filmmaker, and his older brother resents him for it. Inevitably, and with the help of alcohol, the meeting in the hotel and the subsequent night out turn rather bad.

Ah-reum is a young woman who has checked in the hotel in order to recuperate from a rather bad break up. She calls her best friend, Yeon-joo to the hotel and the two share a room, mostly trying to make the latter come to terms with the end of her relationship. Eventually they stumble upon Yeong-hwan, who wastes no time in flirting with them, although to no avail, despite the fact that they actually know and admire him. A bit later, they also recognize Kyeong-soo, but the lives of the two follow different paths than the men, in general, despite the fact that they seem to be at the same place, repeatedly. 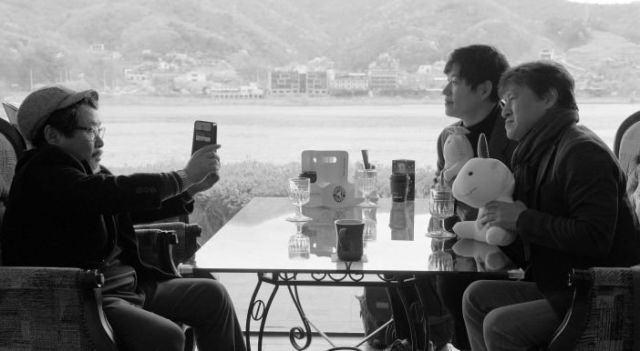 Hong Sang-soo directs a subtle and mellow slice-of-life film that deals with the concepts of loss and friendship on the women's arc and of family and being an artist on the men's one. His approach, however, is not analytical at all; to the contrary, I would say it is just presentational, perhaps with the exception of the last concept, which shows that artists crave for admiration and they are not beyond using their fame to try to flirt with women. The fact that Yeong-hwan, who embodies the second element, fails embarrassingly, is both a comment (perhaps even associated with Hong himself) and a testament to the genuine sense of humor Hong Sang-soo has, along with the concept of the receptionist who seems to be a fan of everyone.

This element however, as much as his other regular motif, of the long, drunken dialogues, is quite toned down here, while the somewhat confusing, different timeframes are nowhere to be found at all. This tendency expands to the technical department, with the trademark, sudden zoom-ins being scarce, while this time, he has even included a zoom-out in the same fashion, which can, once more, be perceived as subtle, self-deprecating humor. This same sense also applies to a dialogue scene between the two women, where Yeon-joo talks about the director, stating that he does not appeal to the masses, neither is he a real auteur.

Kim Hyung-ku's cinematography is exceptional, particularly his framing, while the way he shoots the hotel by the river and the snowy setting fits the general aesthetics of the movie perfectly. Son Yeon-ji's editing allows the film to flow in a mellow rhythm, without any particular highlights. 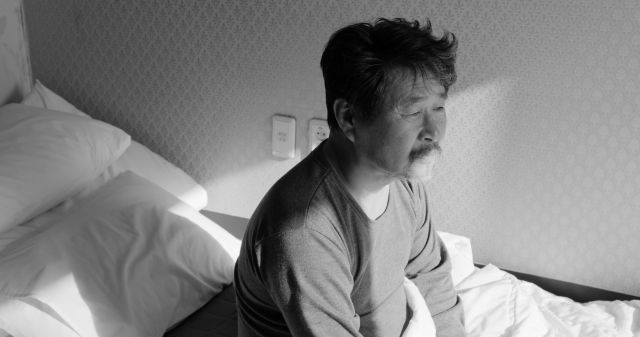 Ki Joo-bong is quite good as Yeong-hwan (in a performance that netted him the Best Actor award at Locarno), a successful artist but failed husband, father and man (regarding his success with the other sex), while Kwon Hae-hyo as Kyeong-soo and Yu Jun-sang as Byeong-soo highlight their differences and their chemistry nicely, particularly in the scenes they argue. Kim Min-hee Ah-reum portrays the depressed Ah-reum naturally, without any "intense" moments, with the same realism applying to Song Seon-mi's performance as Yeon-joo.

"Hotel by the River" is one of the "tamest" films of Hong Sang-soo, but remains a very enjoyable experience, and I felt that its style applies to a much wider, although again art-house oriented, audience, than the majority of his films. On the other hand, it is also less impactful than his best titles.

"[Hancinema Film Review] "Hotel by the River""
by HanCinema is licensed under a Creative Commons Attribution-Share Alike 3.0 Unported License.