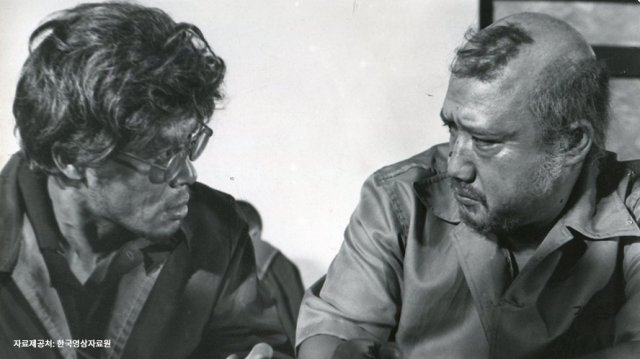 With a career spanning over 50 years in a country that censorship rules changed repeatedly but remained quite strict for decades, one can only marvel at Im Kwon-taek's abilities to adapt. After the very strict censorship of the 70's under President Park Chung-hee's authoritarian "Yusin System", the 80's brought a "lenience" in the censorship that allowed filmmakers to deal with the social issues of the then Korean society, with the consequences of the dichotomy and the civil war becoming dominant themes. Im Kwon-taek was one of the first to take advantage of the new rules, with "Jagko".

The movie begins with the policemen picking up a homeless man and bringing him to an asylum, which functions more like a prison, though, not letting the people that are left there to leave, despite the fact that they receive meals and medical care. The homeless man, Song Gi-yeol, is soon revealed to suffer from stomach cancer, although the medical stuff do not inform him of his condition. Eventually, Song recognizes another of the "inhabitants", and accuses him of being a former red guerilla leader named Jagko. Thus the past story of the two men starts revealing though flashbacks, where we learn that Gi-yeol was a young policeman during the Korean war who managed to become famous due to his ability to arrest partisans. When he managed to arrest Jagko however, his fate turned for the worst, since his prisoner managed to escape, initiating a series of events that eventually destroyed both men, Song Gi-yeol in his obsession to catch the one who escaped, and Jagko for having to spend his whole life as a fugitive.

Im Kwon-taek directs a psychological drama, while using the fates of his two protagonists to highlight the fact that communists and anti-communists suffered the same during and after a war that was actually a power play between USSR and the USA, and had little to do with Korea. This last comment is quite eloquently portrayed by both their past (as portrayed in the many flashbacks) but also their current life, who finds them in the exact awful situation. Furthermore, two phrases close to the finale synopsize this comment. Jagko, who has volunteered to donate his eyes after his death, says that he wants to give them to someone else to allow them to look at all the things he couldn't because he has always hiding. Gi-yeol replies that his own were ruined for always trying to find him in the crowd.

Through the flashbacks, Im manages to analyze his two characters quite thoroughly, in the aspect that moves towards the psychological drama. However, this analysis and the aforementioned comments do not make the film an art-house one, since the director has included a number of genre elements, particularly through the incidents during the war, and a number of scenes filled with sensualism. This approach allows him to end up with a quite entertaining movie that succeeds both as a social commentary and as a good story.

Both protagonists are great in their parts. Choi Yoon-suk portrays Gi-yeol's obsession that has led him to transform from a successful man to an almost mad, with elaborateness. Kim Hee-ra as Jagko highlights his cunningness, which has not allowed him to avoid despair though, equally artfully, while the chemistry of the two is one of the best assets of the movie.

Ku Jung-mo's cinematography is quite good, with him retaining a sense of claustrophobia that mirrors the psychological status of both protagonists, for almost the whole duration of the film, despite the many changes in setting. Kim Hui-su's editing allows the film to flow with a relatively fast pace, while the flashbacks are well placed and easy to recognize.

"Jagko" is one of the "easiest" films of Im Kwon-taek, at least to the contemporary eye, since the Korean veteran has managed to combine meaningful commentary and entertainment in the best fashion.