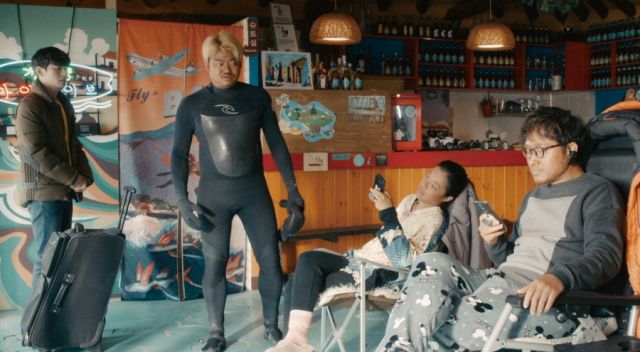 Trying to speak about serious topics through comedy is a great way to communicate your messages through cinema, and that is exactly what Shim Yohan is trying to do in "Welcome to the Guesthouse", also adding to the entertainment the film offers by making surfing the base of the narrative. Let us see if he succeeded.

By chance, Joon-geun, who is struggling with his studies and his future in general, lands a job in a surfing guesthouse by the sea, where he is to attend the establishment (which offers lodging and coffee) and the needs of the surfers, who are nowhere to be found, however, since he arrives in the middle of the winter. One small detail: Joon-geun does not know how to surf. Thus, it is to the surprise of the three regulars in the guesthouse, the owner, a girl with a temper that takes an immediate like to Joon-geun, and a dyed-blonde guy who seems to be the funniest of the three, that Joon-geun is there to work. However, all three of the guests are quite loose on the matter, and decide to hire (they function as a committee after all) Joon-geun and to teach him how to surf.

The young man however, seems to have no talent for surfing at all, despite the desperate efforts of his mentors. The situation becomes even worse when a spoiled, rich surfer arrives to the beach with his impressive girlfriend and initiates a series of events that have all four of our protagonists mad at him, along with a challenge for a surfing duel from Joon-geun, who is to happen in one month, with the loser having to abandon the place once and for all. As the actual circumstances of the protagonists are revealed, Joon-geun finds himself in a dilemma, when an opportunity for an actual job emerges, with him having to choose between his new pals and the prospect of a "regular future". 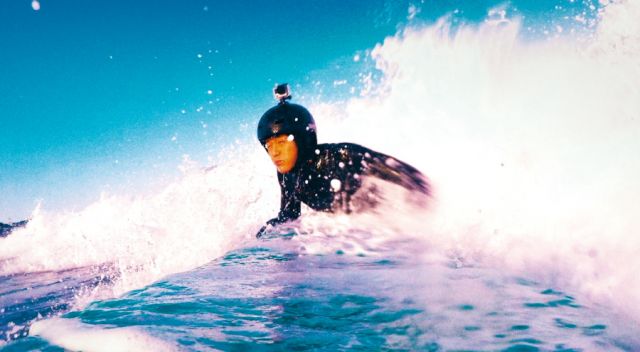 Shim Yohan's main comment revolves around the hardships youth face nowadays in the professional world of S. Korea, that actually begin from the education level. The medium of this comment is Joon-geun, whose uncertainty about his future has resulted in a constant sense of disorientation about his decisions. On a deeper level, the film poses the question of if one can follow his dreams, passions and aspirations (hobbies one could say) and still make it professionally, with this question actually being represented by all four protagonists. The answer, however, is a bit vague and naive, in Hollywood-style one could say, something that definitely faults the narrative.

Apart from context however, the comedy aspect in the film works well, particularly through the great performances of Bak Sun-young in the role of the feisty girl and Shin Min-jae in the role of the blonde "clown", with the two actually carrying the comedy aspect with the help of Lee Hak-joo as Joon-geun, although he mostly reacts to their performance. An issue, however, emerges also here, since the comedy does not carry on for the whole of the film, which takes a turns towards the almost tedious at about the one-hour limit. 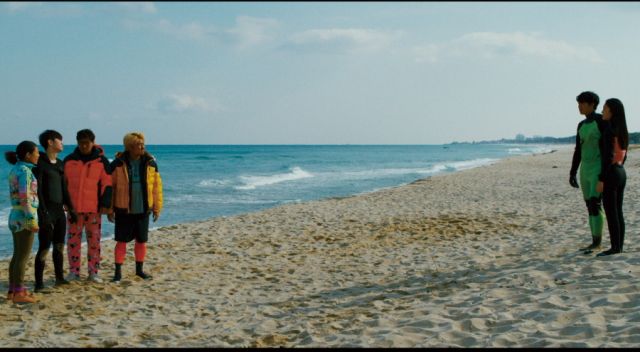 Surfing is presented quite thoroughly, with the film taking its time in presenting a number of aspects of the sport, both regarding rules and training, in rather interesting fashion. This part benefits the most by Han Sang-kil's cinematography, who presents the sport and the particular location through a number of captivating sequences. Furthermore, the combination of Choi Yun-yuk's realtively fast editing with Lee Sang-ryun's music offers a number of entertaining moments, like the one with the dancing in the beach.

"Welcome to the Guesthouse" left me with mixed feelings, since none of its premises (surfing, comedy, social commentary) are engagingly presented for the whole duration of the film, resulting in a movie with many interesting moments, but mediocre as a whole.

"[Hancinema Film Review] "Welcome to the Guesthouse" "
by HanCinema is licensed under a Creative Commons Attribution-Share Alike 3.0 Unported License.