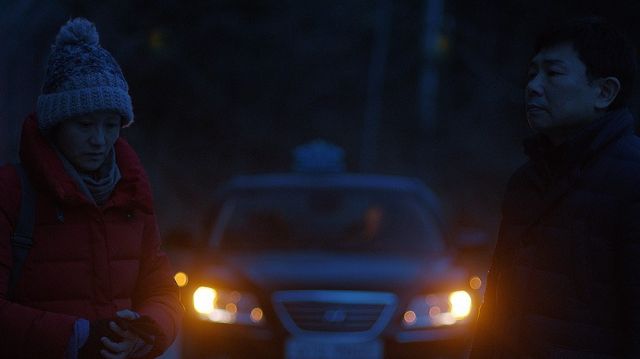 As I have stated many times before, Hong Sang-soo's influence in the indie, art-house production of Korea is visible on all levels, and "Winter's Night" is not exactly an exception. A number of unique elements, here and there in the narrative, though, allow the film to be a work on itself, and a rather entertaining experience, at least for the art-house audience.

A married couple, Eun-joo and her husband Heung-joo visit the famous Buddhist temple of Cheongpyeongsa in the South Korean town Chuncheon, in a repetition of the beginning of their relationship, 30 years ago. On their way back, and while riding a taxi, Eun-joo realizes she has lost her phone and the two are forced to go back. Unfortunately, due to the fact, they miss the last ferry and are stranded in the area surrounding the temple, where a cheeky owner of a bed and breakfast seems like their only refuge. Soon, it is revealed that their relationship is in crisis.

At the same time, a soldier and a young girl also share the same fate, as the latter is pondering on whether she wants to become her companion's girlfriend. The meet up of the two couples sends ripples down both relationships, but soon the borders between past and present, fantasy and reality are blurred, with soju playing a key part. 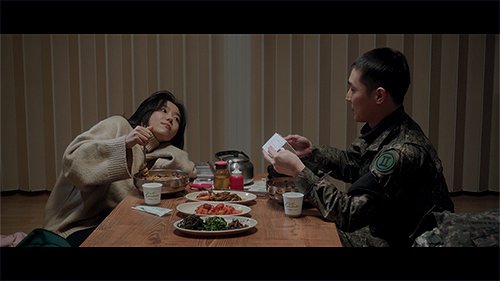 The similarities with HHS movies are quite obvious: the drunken dialogues, the blurring of reality and fantasy with a pinch of surrealism, the presentation of a failing relationship, and the lack of action all point towards the Korean auteur's cinema. However, Jang Woo-jin-II has implemented a number of elements that deem "Winter's Night" much more than the work of another wannabe. The presentation of the two relationships, and particularly the fact that the one with the soldier and the girl is probably the most significant, as it induces the film with a rather romantic essence, although not to a point that this could perceived as a romantic flick.

The depiction of two people who start to realize that their relationship is coming to an end, but still want to try and work on it (particularly Heung-joo), is quite well presented, with the back and forths in their past working quite well in the narrative, occasionally providing scenes of laughter through the drunken dialogues, with Heung-joo again being the main source of this element. 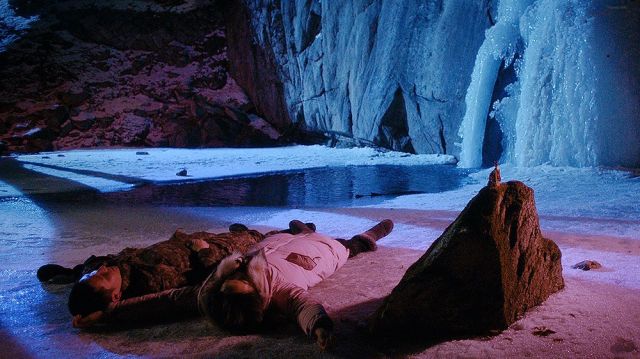 Although the minimalism of the genre is quite evident once again, as highlighted in Jang own's editing, who occasionally just uses the recurring image of a painting to change scenes, nevertheless, the visual aspect is quite impressive. Yang Jeong-hun in the cinematography and Kim Ah-reum in the production design have done an excellent job, mostly by using neon lights that give the various sets an "uncanny" and mysterious essence. This tactic extends both to the indoor sets, particularly the various parlors Heung-joo visits (The karaoke scene is funny as it is surrealistic) and the outdoor shots, with the snowy set with the frozen water being the greatest sample.

The acting follows the rules of the art-house movies, with the actors playing the parts with an utmost focus on realism. This tactic is mostly mirrored in Seo Young-hwa as Eun-joo, who gives an utterly natural performance, almost without any kind of exaltations. The one who steals the show, though, is Yang Heung-joo as Heung-joo, whose depiction of various psychological and physical statuses (I mean drunkenness) is exceptional, and arguably the most entertaining part of the movie.

"Winter's Night" is a competent specimen of Korean indie cinema, that most fans of Hong Sang-soo will enjoy, while almost any viewer who gives this a chance will be impressed by its minimalist but also impressive visuals.